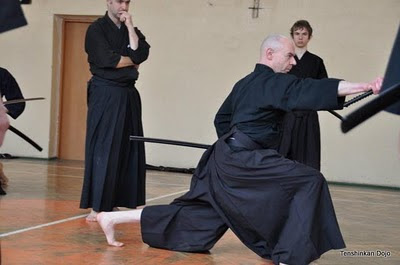 I have discovered (not the first person, I’m sure) one of the best methods of training and improving Seiteigata – teach it to beginners. I spent a good half of the lesson just trying to instil a bit more understanding of Seitei to our lower grades including a member of the Monday-night beginners’ class.

By carefully explaining both the rationale and the methodology I found it can really remind you how and what to do. It sometimes feels like a wakening up after having spent so much time improving “performance” and somehow putting to the back of your mind what the basic movements are.

I handed over to Harry about half way through and set my sights on tackling one of the most challenging kata for me – Sunegakoi! This kata which for those whose memory of Okuden might fail them is similar to Toraissoku but requires one to move groin-scrapingly close to the floor to block the shin before swiftly forwards and delivering the coup-de-grace.

This is, for someone as lanky as me, quite difficult. I find that getting my toes under quickly enough to be the first stumbling block and then remaining balanced as the leg moves back to be the next. Then, just when I think that that’s the easy bit done with, I have to move an overly long sword into a blocking position that seems to defy the laws of biology. The moving in and cutting is the easy bit but the fact that one should remain at the same height more or less for the duration of the kata is of course quite a struggle.

Anyway I asked my teacher for some help and looked at how he moved the image I have memorised seems reasonable enough, I think I just need to get my legs strengthened up (surprise surprise). Actually not surprising is the fact that I used to be able to do this with relative ease and it is only through lack of practice and perhaps a widening of the waistline that is causing the problems I am now facing. In my personal opinion this kata warrants a lot of practice on my part as I feel it is the one in seated Okuden that I have most problem with purely from a flexibility and strength perspective.

At the end of this session our teacher commanded us through the Seitei, Shoden and Chuden which I found quite invigorating. I think I need to get the endorphins running some time to get my iaido really working.
Posted by Andy Watson at 00:59 No comments:

Not much to say about tonight as there was quite a lot of talking going on. Shame really, last week was so active at the seminar that I was hoping to keep the inertia going. I was chastised a bit for my hips not being stable during noto so this is something to work on I suppose. Apart from that I spent the session working on Shoden. Ah, just remembered, I must combine the preparation for the tsuki on Gyakuto into the forward movement to make it a bit more cohesive.

At the end of the practice we were made to do Koranto with ever decreasing number of steps and I thought I would make it more challenging by throwing in a double kiritsuke at the end. It was surprising how easy it was once I had forgotten what the feet were doing. 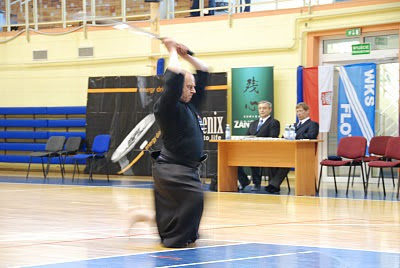 Right arm is feeling a bit painful today probably due to the rather large amount of ochiburi's I had to do. That particular part of the technique is feeling better I think largely due to following:
Anyway, that's it for now, might throw in some more memories of Villingen soon.
Posted by Andy Watson at 10:54 No comments:

Well having returned recently from this most excellent seminar I thought I would put finger to key and try and record some of the stuff that was conveyed.

I think the thing that most bothers me at the moment is how much people have got themselves into a flap about hikinuki/ukenagashi ni kaburi. The first thing to consider is that this isn't by any means all that new. Ishido Sensei first conveyed this small change to us at the Hagakure Iaido Seminar back in 2006 (I wrote an article on the seminar which can be found at http://www.daedalusdesign.co.uk/hosted/iaidojodo/articles/articles-hagakure06.htm). At that time it was clearly explained that it was absolutely necessary for the tsukagashira to be leading the upward movement into furikaburi and there was no necessity to keep the tip up during this process.

This principle still exists for all those movements where it is necessary to bring the sword up by going through ukenagashi (i.e. last cut of Morotezuki, cuts 2 & 3 of Sanpogiri, 2nd cut of Shihogiri).

Within one or at most two years, the principle of hikinuki was formalised into the Seitei system. This basically meant that a small drawing-out motion was necessary while bringing the sword up. It was pointed out quite clearly by Ishido Sensei that this drawing out was delivered by turning motions of the body along with a gently contraction of the arms. It has best been demonstrated with one person holding a saya in which the exponent's sword was inserted. From there on a movement, once again through ukenagashi, would lead into furikaburi.

I once asked the question, why go through ukenagashi, and both sensei's Ishido and Kishimoto both explained that it was the most efficient way of moving the sword. As an engineer I find this response to be reasonable and logical. Furthermore we have been urged to keep the sword as close and as aligned with the centre line as possible. Again this makes complete sense in keeping unnecessary movements to a minimum. 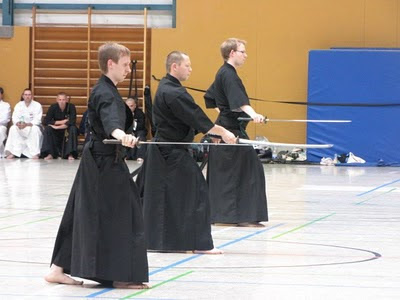 So what constitutes going through ukenagashi? Simply put, ensuring that the sword is slanting down from the tsukagashira means that this can be called ukenagashi ni kaburi. The amount of slant is a matter of taste and physical specifics but obviously too vertical would mean a lack of control over the sword, over horizontal and it is no longer ukenagashi.

Why am I posting this? I think perhaps due to the number of people that have thanked me for this blog during the Villingen seminar I thought I would try to give something back which was useful. I sincerely don't think that this ukenagashi/hikinuki thing is something which people need lose sleep about. If one tries to move the sword naturally, succumbing to it's natural inertia, the sword moves exactly as we are told to.

Anyway, perhaps it would be good to clarify these movements in their respective kata:

I hope that more or less makes it clear. Again I don't think these aspects were introduced to trip people up; they are merely there to represent the most natural, efficient, smooth and realistic action of the sword.
Posted by Andy Watson at 13:28 No comments: