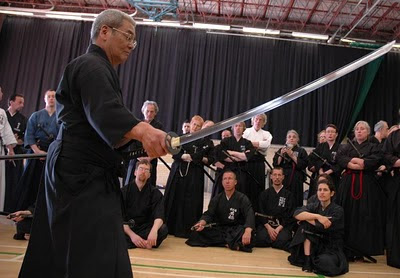 Thankfully due to the now, more focussed, approach to my training I can remember what I have done for the last couple of weeks.

During last week's practice everybody wanted to go through both okuden sets so we started with suwariwaza and then finished with tachiwaza. The sheer number of kaewaza reminded me of a friend's interpretation of what Oshita Sensei had recently told his students - "focus on the hon-waza; when you have got that right then do the kae-waza". I wanted to share this with our dojo members but at the same time make them aware of the various kaewaza (not that I know them all, far from it). It is tempting to indulge in kaewaza practice but it sometimes reminds me of people who run off and do various styles in order to deepen or broaden their iaido experience while not realising that they are just thinning it. While these two activities are separate, they are not so far apart. Kaewaza exist as representatives of regional differences which are grown from local senior sensei spreading their interpretation amoung their dojo members and possibly visitors from other dojo. I have seen such variations not just in the execution of technique but in the order, naming and assignment of technique as well. Influences from Jikiden and Jushin also sometimes prevail.

Bringing the focus into last night's session, with the return of my sensei from Japan, I decided to work through each koryu form, once each only, in order to a) refocus on honwaza and b) improve individual aspects through varying kata. I decided to not give myself second chances, I would do each kata only once and if I didn't do it to my satisfaction then tough - move on. 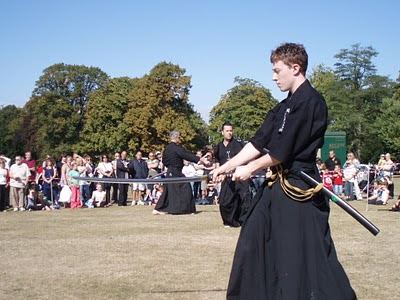 I actually found myself making more progress than normal. I think the "one kata only" introduces a certain urgency to technical detail rather than throcking technique. Legs are feeling a bit odd today having done only suwari waza last night (and quite a lot of seiza/listening practice) but it was good to focus only on my own training for a change.

I am still set on trying to lift all my koryu up to some semblence of 6th-dan'ness although will eventually give more priority to my chosen few koryu for presentation.

I also considered my upcoming schedule today, I am going to Villingen, Eindhoven and Brighton so about 3 weeks of intense practice (and some scrutiny I hope).
Posted by Andy Watson at 23:18 1 comment: