I am combining this post with last Wednesday's training evening with this year's Iaido Spring Seminar which I have just got home from.

Wednesday night I thought would be nice to get stuck into some seated okuden with a few of the other highish grades from the dojo. This was because a) I wanted to explore the seated oku which I had tasked myself with training for my grading b) because we don't do it much and c) because I am getting a lazy fat arse which needs some more training.

I explained the "kotsu" of Kasumi, the first okuden suwariwaza and we worked on it for a bit. I swear this is a nice form and I hate it because it sooo bloody difficult to do with a large heavy sword. I think this form alone requires more than the usual amount of dedication and training to get right - where else do we do a right-to-left cut? It is however a fantastic kata for developing merihari, its sudden ebb and flow of speed is quite unique, I just have to learn how to do it without my tendons popping out of my arm in fear.

Working through the rest of the set really revealed some interesting facets of my iai, most notably that I am very much out of practice. I remember actually being quite flexible and agile with some of these forms but now feel a bit clunky and unbalanced especially with forms like Shihogiri/Yosumi. I realise that this can be fixed with some dedicated practice but I am a bit aware that I need to "catch up" with myself before challenging more to the kata in order to get it to "6th dan-ness".

Onto nicer things, Towaki and Tozume came out quite shiney. Both of these are potentially koryu forms for my grading. Towaki I think is becoming a favourite, Tozume is a little too much like Tsukaate to make it distinct for the grading although I feel quite able to pull a good one out of the hat, as it were. Towaki however allows a bit more challenge, personal interpretation and expression.

I'll jump forwards a bit now to this weekend's seminar because of its Towaki relevance. For the benefit of the readers of this blog, in case you don't know Towaki it begins in tatehiza facing the front. You draw and cut an opponent to the right front diagonal across kesa finishing with the sword outside of your right knee. You then move to the left front diagonal and perform kirioroshi.

During training today I was quite keen to give this a bit of a go when we had some peer-reviewing exercises with each other. At one point my sensei came over and suggested that I go for the Kanagawa version rather than the Tokyo version. The difference being that the former makes the second cut with the right knee forwards, the latter requiring a full step out with the left leg. My teacher explained that the former version was much more compact and looked a lot sharper. I gave this a try and sure enough it was indeed much easier to control especially the speed. I think I will continue to train with both version if anything just to try to get the second version sharper (I'm sure it will help all my iai anyway).

Harry had a look at my Shohatto and noted (as Chris Sensei had done previously) that I was leaning too far back and sticking my belly out a lot of the time and we worked on trying to create the right tension in the belly and chest. For me it means having a bit more tightness in the lateral part of the abs (in fact I can feel a bit of fatigue in them now) rather than pushing my belly out (which with me is easy to do ;-p). Ron Sandford from our dojo was also able to help me with this a bit.

I went onto ask Mathew Cook and David Green for their opinion on Towaki and both agreed that the Kanagawa version looked a lot better. For me, this kind of peer review is important, as well as getting technical feedback from my seniors it is also very nice to have people give feedback who don't have any more advice to offer other than that. The feedback is quite raw in that sense and sometimes that is just as reinforcing as more expert opinion.

At the end of the Koryu training session each group was asked to do an embu and so this was quite a nice opportunity to try some of my Koryu forms with a bit of pressure. I did Shohatto, Seichuto, Yamaoroshi, Towaki and Ukenagashi. The two shoden forms came out more or less how I expected they would. I would still like to feel more in control of the timing and slow parts of them down but there is a part of me that drags me through the form rather quicker than I would like. That might be quite a natural instinct and something best not fighting against so I will have to ask Chris Sensei a bit more about that. Yamaoroshi came out quite good and I was quite happy to do this with a bit of pounce and scarper. I have always admired the blinding speed that Ishido Sensei can do this at and he has often expressed that most of the chuden forms cannot be realistically executed unless done at a fairly rapid pace due to the close proximity of the enemy. At the same time however it is important not to get busy and I felt that I managed to just stay out of that saucepan.

Towaki was by far the best form, I will have to ask Tony Devine if he saw it and get some feedback as he is something of a specialist with these tight, sharp forms. Finally Ukenagashi (the seme and quick draw version) - I didn't get quite the right amount of "linger on the centre line" as I wanted but the cut came out good. 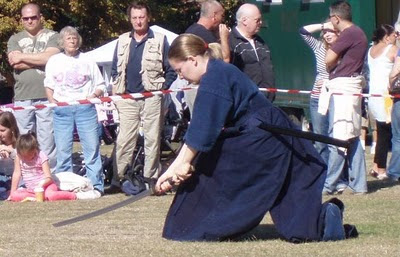 The rest of the seminar including the previous day was nice to get some long practice and I am grateful to Tony and Nobby for pushing us through the Chuden and standing Oku quite quickly.


To conclude this posting (and I think it would be a good idea to start drawing up conclusions after each session posting):