Just as one likes to afix theme music to events, I have decided I would pick something nice, 80's and with distant stares...

http://www.youtube.com/watch?v=m9WdUgn0XkU
Posted by Andy Watson at 15:02 No comments:

Iaido Training Session 75 and 76 - the final tying of the straps...

Well, I had my last training session at the dojo last Wednesday. I managed to spend a bit of time doing my warm-ups and stretches and found the following training a hell of a lot easier. Sensei had me slow down the approach in Kesagiri and it certainly showed a better contrast of Kankyukyojaku that way.

I spent the rest of the evening going over my 8 form sets (4 koryu + 4 successive seitei) and got some work done on Project Delta. I realise (and I'm slightly glad of it) that this is going to be a more long-term thing.

We had a mini-taikai practice at the end and gave each other some feedback. I need to keep my ochiburi in a bit more at the end as it has the propensity to go wide.

On Saturday I went to Hilary's and spent about another 90 minutes doing my 8 form sets. I am quite liking Tozume now. The key is definately getting the hand and hasuji angles right as one prepares to draw.

So, only the pre-event seminar, the European Championships and some drinking stand between me and the grading some 5 days and 23 hours away. I think I have done all I can for the time being to prepare and there will of course be lots of training time in Andorra (not too much sitting around listening I hope). I have had to think about and answer some questions in the last few months, the biggest one being, what if I don't pass?

I am quite stoic about this actually. I realise that three factors determine if I pass:

1. The opinion of the examiners: the level they determine is appropriate, what they perceive on the day, how they are feeling, what they think about me.
2. The decision from on high about whether anyone will be allowed to pass.
3. My long term preparation and the performance I display as well as my short term condition (i.e. how hungover I am).

I really have control over only one of those with a small influence on the others. The main thing I can do is train, it serves the means and it serves the end. I will do the best I can do and I that's all I can do. I don't know if I have trained enough yet but I have trained. It just remains to be seen if it is enough. 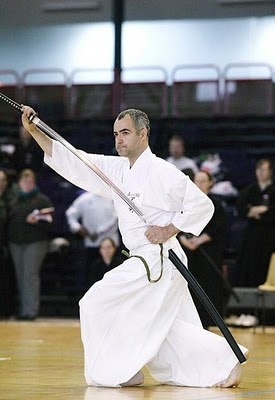 I would like to express my sincere thanks to all those who have wished me luck on this examination and supported me in all kinds of other ways. It reminds me that while Iaido is mainly a solo martial art, it isn't one that you do alone.
Posted by Andy Watson at 14:26 1 comment: