I got to the dojo in plenty of time last night to do a thorough warm up, stretch, do some cutting exercises and generally try to get some enthusiasm to train.

I had been feeling a bit poor about my Sogiri from the last couple of sessions and so thought to just hack through some of these. I must have done about twenty or so and varied the speed, direction within the dojo and eventually practiced doing the kata while turning a 90 degree curve, sometimes to the left and sometimes to the right - it's surprising how disruptive it can be to the cuts. I felt a lot better after doing this and Sogiri felt like it had tightened up somewhat.

I decided to then do some deeper practice into Ukenagashi and this, dear reader, is what I will devote the rest of this posting to...

Let's first look at the grading points from the ZNKR manual:


*This last point seems to go through the greatest number of annual revisions.

It was also pointed out to us last night from Chris Sensei that the right foot does not have to butt up inside the left foot completely but should be in the right zone to roughly create the "i" shape.

The positioning of the feet and the lateral position change of the head has been the cause of much discussion in the last few years, in Japan as well as Europe. I try to follow my own lineage of teachers although it is always useful and interesting to listen to others. There are a few points which seem to be common to all opinions at the moment:

Regarding that first point, I have personally had quite a few discussions with people about what the opponent is doing during the kata - do they aim for the head and then change the direction of cut or are they aligned with the knees and aiming for where the head is moving towards? I think the best answer I observed was from Yamazaki Sensei (from Shizuoka) who back in 1999 in Brighton demonstrated with Ishido Sensei as the uchidachi, how this form really works. Ishido Sensei came piling in with a full speed cut, Yamazaki Sensei stood up in an instant deflected and cut. It was some of the most dynamic iai I had seen. What was noticeable was that there wasn't the time for the uchidachi to re-establish targets and change direction, everything was over in a second. 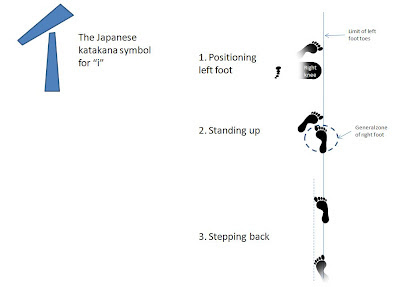 Ishido Sensei always talks about rotating upwards as if changing a light bulb above one's head. This also helps to create the image of one trying to remain as centralised as possible.

My personal opinion to base my own training is that I will endeavour to remain on my original line as much as possible but only in as much that it does not incapacitate my ability to stand up. I have quite strong legs for my bodyweight and if the form is slowing me down then I think that something in the basic shape is wrong.

Anyway, I asked Cezary to film me doing Ukenagashi, first four times with me just doing a natural Ukenagashi. I then slowed down and tried two times to limit my rightward movement.

Here are the first four:


And then the final two with me taking a bit more care about left foot positioning:


It is possible to see from the last kata on the final movie, the one which I consider subjectively to be the most compliant with the foot position rules, that some lateral head movement is unavoidable.


The residual frames and arrowed line demonstrates the course of the movement. 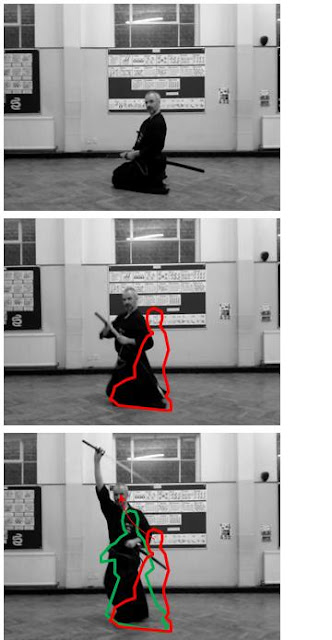 I believe there is a way of keeping the head at the same point but unfortunately it requires yoga-like movement and positioning the left foot actually next to the right. This requires a substantial amount of time and more than is required if the opponent is sitting a minimum distance from you i.e. within one sword + one arm length away.

I did notice from my embu's that one thing that I am not doing is allowing the sword to come up from the deflection to a position above the right shoulder. Instead I am letting the kensen swing behind me and am cutting from there.

I have in the last few weeks been trying to change that so that it cuts from approximately the same position from the upper point in Kesagiri. Still work in progress by the looks of things.


Anyway, as is my style of learning I scored and tracked my performance throughout using the main basic criteria set above. I changed the order of the criteria so that they more or less fall in the order of techniques in the form. 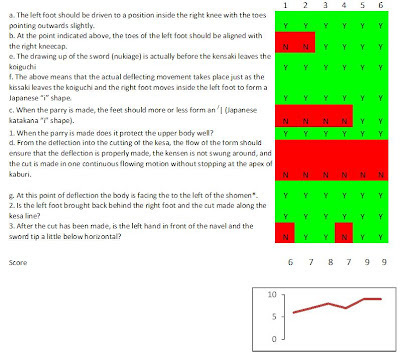 Gradually some improvements appear as I work through the kata but I really have to work on getting the kissaki up after the deflection. I was quite hard on myself as while I managed to keep the sword moving in a flowing movement I am always moaning at my other dojo members for cutting with the sword behind them.

I also noted some good points that I was attempting to keep to and I note them here:


Well that's quite a bit of work done on the blog, I'm off for a holiday (not really).