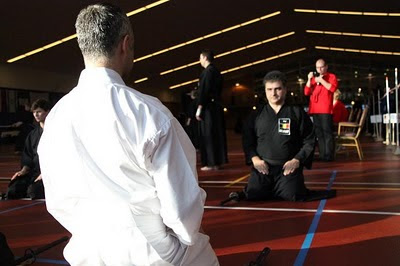 It's getting a bit tricky to keep on top of this blog at the moment what with work picking up and the fact that I am organising 2-3 events for the BKA at the same time. This, I hope, is actually a positive reflection as it means a) I'm getting my ever fattening ass off my chair more frequently and b) I'm doing more budo stuff generally rather than just regular practice. In fact I had a look at my calendar recently and found that the 15th August will be the first regular Sunday morning Jodo practice that I will have been to in 10 weeks! I realise that a) holidays are fun and b) doing taikai and seminars is of course brilliant practice but I do miss normal regular training in the dojo. I think there is something very special and different about training in your own dojo. Even being at a seminar with your favourite Japanese sensei is probably not as "embedding" as regular training.

Anyway, spent a bit of time last night getting some photos done for my teacher's Shoden Iaido Manual which meant me holding rediculous, mid-move poses for a while although it is quite a good thing to make sure that the techniques are correct. I also discovered some bits about some of the faster moves that I hadn't realised before. For example it never occured to me what the drawing action in Batto (MSR) actually required in terms of movement and direction of the sword. When I saw it on camera it made me think about all sorts of ways to improve my movement (using the left hand more of course being one of them).

I spent most of the rest of the lesson coaching Ray, one of our ikkyu's and resident photographer, for his koryu taikai and 1st dan grading in Brighton. At the end of the session we all took turns to do embu's in groups. I feel quite at home with Shohatto and Yamaoroshi for now but Towaki definately needs some practice. The second cut is easy enough but I am for certain out of control on the first draw. I watched Morishima-sensei's embu of this and it looked brilliant - really direct, simple and devastating. I am a loooooong way from that. I think I would probably fall over if I actually hit something with my sword at the moment. I guess next week might be a good opportunity to get some feedback from Ishido Sensei in Eindhoven.
Posted by Andy Watson at 10:50 No comments:

Not much to report on last Wednesday's practice to be honest so I will focus on our National Taikai which took place last Saturday for Iaido and Sunday for Jodo. The theme for this blog entry is what you gain out of losing and I can certainly say that it is significant at this point.

This year gave the 5th dans the opportunity to do one koryu for their individual's and then follow up with no.2 and no.6. Throughout the early part of the competition I varied my koryu to get the feel of what was working but then settled on Oroshi as things started to get serious. In the end I finalled with Harry and knew that this was going to be difficult. I knew that Harry could be very smooth so I aimed for sharpness and tried to make the forms look like a real fight. Everything seemed to go smoothly and then...I lost 3-0.

I was a bit surprised as I came off as was Harry and we asked if either of us did anything wrong. Nothing seemed to come to light.

As we went into the team event again I lost a flag once and was a bit perplexed. The forms felt quite vigorous. I started to suspect that this vigour was getting the better of me and maybe was too fast for some judges' taste. In the final we were up against our same dojo with Harry as the last player as was I. We were even when Harry and I went on and I thought about how to get this shiai.

I cooled, I calmed...I did the kata. It went smoothly again. I don't think I went any slower to be honest. I won 2-1 (I wasn't surprised to drop that one flag).

There was something different though and I think I have sensed it in doing Jodo Kage before, a certain coolness and quietness to the performance which gives it a fire of its own. Maybe it's tame, maybe it's something else. It seemed to work and felt very nice.

First day back home after the event so might write more on this later.
Posted by Andy Watson at 15:18 No comments: