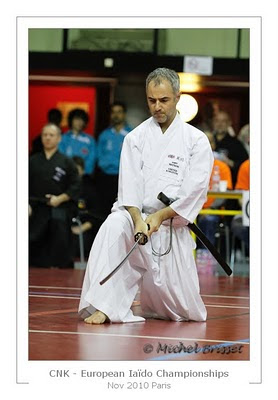 And so we continue on the yearlong slope down towards the grading. I have in the last week or so conversed with many people about the European Iaido Championships especially concerning the grading. Those of you in the know will know that it was something of a massacre with only one 6th dan candidate passing out of all the 5th, 6th and 7th dans. I certainly thought there were at least a few who were worth their salt in this grading including my good friend Henry Schubert whose mental image I use for how people do Jikiden (this isn't to say that there aren't other people more experience than Henry, only that I have worked more with him than any other Jikiden person in koryu).

The results of this examination have crystalisd my drive though, I now realise that I cannot at any rate, take my foot off the accelerator in training myself for my 6th dan. Too much training may not be enough.

Anyway, on this particular Wednesday 17th, no sensei and so we all had a party. Not really, but we did all work on koryu. Even given the drive I am feeling to train more, my right arm was then and is still feeling the effects of last week's overenthused ochiburi's and I wasn't in the mood for lots of training. I spend some time with Raj and now have him up to Tsukikage! He's doing very well and is very enthusiastic to learn and train new forms.

I spent a bit of time "testing" my balance at end of cuts and think I will work on this next week with a bit of sayu ashi giri training. George filmed me doing an embu but can't download it yet to evaluate it. I am wondering if there is a budo training app for the iTouch.
Posted by Andy Watson at 22:23 No comments:

Iaido Training Session 29 to 33 and everything else

Should I have shaved on the morning of the European Taikai?

Well it has been a busy period, I have missed posting onto my blog several times but the sheer number of events both martial artistic and work related have kept me away from cold evenings huddled around my computer screen.

Since my last training blog post thingy I have:
Obviously it is impossible for a person with as shabby memory as my own to recall each and every details of my training recently so I will stick with the highlights...

Training has been fairly quiet recently, without Lucy and Aurelien there the atmosphere has been a bit calm and staid and sometimes difficult to motivate myself to doing pre-taikai training without the whole representation of our dojo there. I have been working a lot on koryu lately mainly to try to strengthen my legs and make it look somewhere close to the same level as my seitei. As usual, Chuden has been my choice of forms in the main and I have learned quite a bit about Iwanami especially in terms of how to turn and do the driving cut. Weight distribution seems to be key with this form and it cannot be performed properly if this weight control is lazy. Trying to get the right balance of large and small technique is also interesting with the first three forms and I think this is something I need to personally research.

Raj has also compelled me to think about Jikiden quite a bit to the point of asking one of the Polish guys to show me some of his Omori Ryu to remind me of the finer points. It is quite an interesting feeling to do a different ryuha even one as close to Shinden as Jikiden is. There seems to be a more obvious contrast of large and small movements in the techniques and I guess a lot of this is from me emulating Henry Schubert's expansive way of doing the kata.

I think I now want to start doing the videoing process of tracking my technical progress and have asked George to bring his camera to the dojo. Guess it's time to break out the spreadsheet...

Jock Hopson Sensei, Harry and me were invited along with Robert Rodrigues Sensei to deliver an Iaido and Jodo referees seminar in Warsaw. It was a very pleasant experience, not much to say on the Iaido development front though only that the event reminded me how much a skill like judging and examining requires soooo much experience. Jock saw things that I hadn't even noticed during both events of the taikai and the shinsa.


At the European Iaido Championships

The event this year was held in Paris and the BKA team was fully prepped through a 10-hour coach ride from Waterloo, through a wormhole in the Paris orbital and deposited somewhere in Albania.

The event was preceeded with a one-and-a-half-day technical seminar and then a half day referees seminar. I don't want to dwell on this event too much and you will have to ask me personally on my opinion of that event - it wasn't pretty! Suffice to say, it is always an expectation that seitei will change slightly through time, I am however surprised though when it changes from being practical to utterly impractical and actually impossible to demonstrate rationally. Perhaps I should forget it for now.

The taikai event was interesting though. I won my pool and went through the tournament to be beaten in the final by Michael Simonini from Belgium. He has lovely expansive technique but manages to keep it very much under control by not being overly tall but well built. You can see his depth of practice by the sheer control he maintains over his body and sword. The event also allowed me to pit myself against Claudio Zanoni from Italy, my good friend. I have had to change my Iaido in the last few years to beat Claudio by removing the heaviness as much as possible. Claudio is light and sharp and able to maintain a strong posture and I have had to try to do the same. I also went up against Matti Pajaujis from Sweden who only entered into the 5th dan category from last year's grading. Matti is more compact and robust and his cuts are very sharp. Both Michael and Matti were, I think, the only ones to pass their 5th dans when they took it in their group.

So what did I learn?

Doing some pre-taikai training with Aurelien and Daniel also was a bit enlightening when Dan was having problems with the "new" footwork with Ushiro. He was finding himself off balance and I rationalised, tested and proved that keeping the back stock straight was essential in being able to do this rotation quickly. The period also reminded me that young 3rd and 4th dans are liable to rush through furikaburi and not be able to create the right merihari.


Having examined the fight on film and listening to things people have been saying as well as watching performances, I have concluded I need to work on the following items as well as regular kata training:

Well lots to work on again, I have also noted that although the dates for the EIC 2011 are different to this year, I have now done my penultimate EIC at 5th dan and there is a dizzy slope down (or up) towards my grading. The clock is ticking.
Posted by Andy Watson at 12:41 No comments: