Parts of the sword

Please note that I have updated this post with an addition of the term "tsubamoto" meaning the area of the sword closest to the tsuba. Initially I didn't include this as it was my impression that the tsubamoto wouldn't have included the entire lower third of the sword but after discussing this with a budo friend I decided to include it.

Just recently it has been raised to my notice that a particular aspect of iaido has been mentioned at seminars but there isn't anything I can find on the interwebs about it. It concerns the three main areas of the blade of the katana. 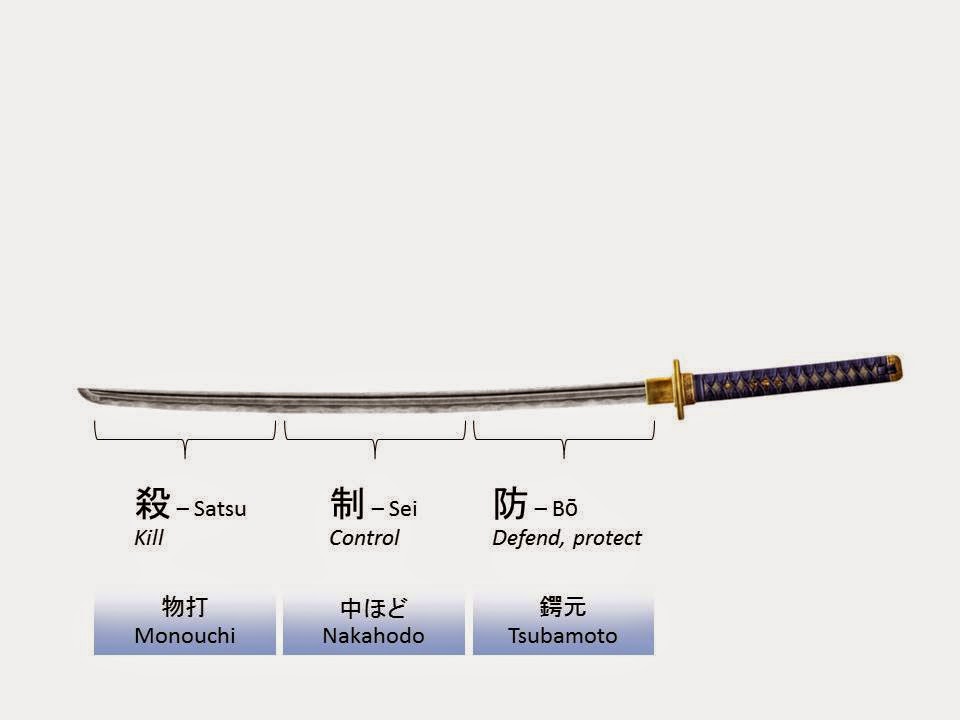 Some years ago in Eindhoven, Kishimoto Sensei taught us that the blade area can be divided up into three main zones.

The closest zone to the tsuba is, what most people would expect it to be, the area for defending oneself (it is the zone which is used in the initial contact of the seiteigata Ukenagashi). This zone is called the "Bō" (no relation to the Japanese staff) and is referred to also as the "tsubamoto" (origin or zone of the tsuba).

The middle zone is called "Sei" meaning control i.e. this is the region that controls the enemy's sword during a deflection or similar movement. It is also referred to as the "nakahodo" (meaning approximate centre).

The zone closest to the end is called "Satsu" (or "Setsu") meaning the killing region. This region is also known as the monouchi.

That said, I sense a sudden increase in site traffic from people about to answer their iaido gakka...
Posted by Andy Watson at 15:02 5 comments: