A special early arrival at the dojo this evening to ensure some personal training. I did a full stretch and then went into my Kusawari no Shohatto training with an emphasis on smooth feet movement and softening the ochiburi. I had about 40mins of just doing this (which is quite a long time in our dojo to train without interruption).

The iai class started after some jodo thwacking and we worked through Seitei with the normal abstract order and with relaxed and focused practice. Space was at something of a premium so after this we divided into groups and I worked the higher grades into ironing the creases out of their first 5 shoden waza. No time to go into great detail now but I thought that the mere fact that someone does koryu does not mean that all seitei-instilled attention to detail is lost. We then worked on a few standing okuden before finishing.

Did a bit more progress on Project Delta this evening which was good although a bit restricted by certain factors at the moment.

Not much more to write about on this occasion, I think the pre-session practice is paying off and I will be booking some extra training after my forthcoming holiday. I wanted to do a cover of this event as for me it was one of the most significant development experiences I have had for quite a while in iaido. This year the event was organised by Tenshinkan in Warsaw and received competitors from Poland (of course, there were 3 of them), Slovakia, Czech and Hungary. The invited teachers were Robert Rodriguez 7th dan renshi, Henry Schubert 5th dan, Harry Jones 5th dan, Jose Abraca 5th dan and me. This was the second time that Harry and me had worked with Robert and it was an honour and a delight to do so. Robert and Jose are both Suioryu exponents and with Henry being Jikiden we had virtually all the koryu covered for those at the event. 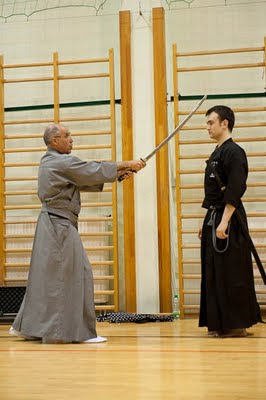 After arrival we had a delicious lunch/dinner in a restaurant in town where I had the most wonderful calves liver I have ever eaten, in fact it might have been the best meat I have ever eaten. On return to the sports centre we then started an iaido seminar from 5pm to 10pm! Quite a change from daylight training.

Henry, Harry and me started on the lower grades in the main hall. Henry demonstrated a very useful exercise with a swordbag to get people to use metsuke properly. I talked a bit about minimising and simplifying the kata's movements to make it as smooth as possible. Actually in the end all three of us gave them all quite a comprehensive briefing on various parts.

All too soon it was break time and Harry and me were asked to look after the high grades upstairs. We focussed quite a lot on Mae and Ushiro in order that they seized that moment of sayabanare and used their hips in both the nukitsuke and kiritsuke. I won't go too much into it now but I have been trying to ensure that a forward hip movement is used in these parts of the kata recently. It's quite difficult to do, especially in Ushiro, but I believe it is absolutely necessary otherwise fumikomi doesn't take place. We then wiped through Sogiri and tried to get them to understand how seme occurs between cuts. It is my strong belief that this happens when one moderates cutting power and relaxes at the ends of the cut so that it is clearly visible that the next cut is primed and ready to go. Posture, metsuke and sword position are all critical in making sure this is manifest. I also believe that the only way to train in this is to "clear one's desk" and get rid of all unnecessary strength and movement.

The end of the seminar arrived and we went downstairs to do the final rei.

On Saturday was the individual championships and after the usual explanations we began. It was very surprising to see the how the level has changed in this area of Europe. Lower grades are much more capable if one looks at their duration of training and some of the halcyon members of Poland I am sure now have problems defending their titles. 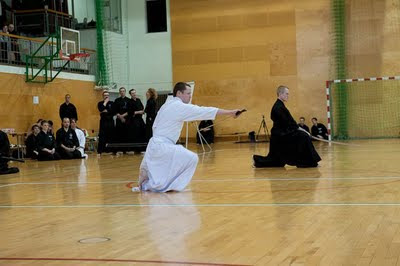 Judging is also becoming a more and more useful experience for me although I do sometimes find myself going into monitor mode where one sits back and relaxes and waits for an impression to be formed of the competitors. At other times, especially when the match is going to be close among people you know, one has to literally count the ongoing score between the competitors during that shiai.

Our sayonara party was held in the same restaurant we had lunch in on the first day, no liver unfortunately.

On the Sunday we began with the team event and it was great to see Slovakia take the victory. Just before the grading, the 4th, 5th and 7th dans were invited to perform an embu. I did:
and was sat right at the front end which was actually quite nice for not being distracted by other people. I could hear Henry behind me though doing similar kata to me (maybe). 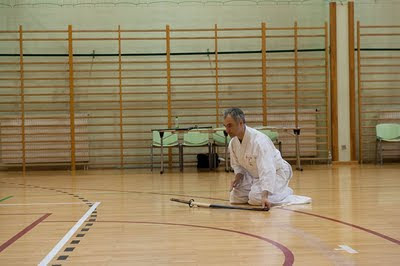 This was the point that made it for me, for the first time I started to feel the 6th dan within some sort of reach. I was able to relax during the embu but maintained my concentration, performed without rushing and did what I thought were good kata. I'm sure some videos were taken so I hope I can review my performance at a later time.

I could write for ages about the whole event really but time is a bit tight this week (I still have to write about last Wednesday) so I will summarise how I am feeling about things at the moment in my preparation: 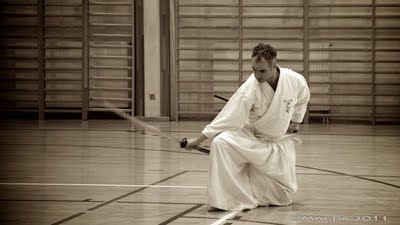 Anyway, to finish, a sincere thanks to my Polish friends for everything.
Posted by Andy Watson at 12:26 No comments: