I wonder again, am I unable to get much writing on this blog done because I am so busy with work and martial arts foolery or am I using that as an excuse? I think it would be interesting to have a read through my past posts and see if a trend underlies it as I am pretty sure that my preparations have gone through a few phases and I am now in the quiet and hardworking one.

I haven't had anywhere near the same frequency of "revelations" in the last few sessions; I have been trying to build up kata mileage and consolidate my technique. As Peter commented to me, my focus is now on how the training feels rather than what conscious concepts I can pull out of it. This I think is important. 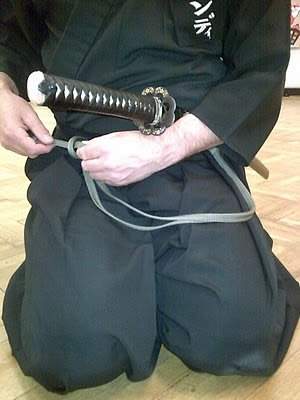 Session 72 was the evening before the European Jodo Championships and I remember us working into the iai time with some jodo preparation so not much done there. The championships were an effort in themselves in mental juggling and emotional control, I'm sure they were good for me somewhere although I wouldn't be surprised if I have reduced my life expectancy by a few days (insert smiley tongue-out emoticon here).

The Wednesday after the EJC (session 73) we were visited by members of the Austrian Jodo Squad who came to do a bit of Jodo and then join the Iaido class. They are very nice people and it is easy to see the hard efforts they have put into their training. We ran through seitei in a variety of ways as there were something like 15 people in a 9-people space. I didn't pay particular attention to my training that evening but I was happy to be getting some in. My feet are still particularly stiff and I am having to spend a good 20 minutes at the beginning of a session in warming them up and stretching the toes.

I joined Hilary's class on the Saturday (session 74) and asked to be left to do just iai. After a long stretching session I started working through the katas doing Seitei first and then combinations of my 4 koryu plus 3 seitei, making 4 combination sets. Tried to focus on centreline management as well which was good in that dojo which has lines all over the place. Daniel Silk had kindly arranged a squash court for the two of us to do another hour after the normal two hour session which I found very useful. I was able to calm myself a bit and work on composure within the form. I do find any kind of time restraints on an embu practice to be quite destructive at the moment. I guess it is personal taste (and maybe a liking for pouting and scowling through my eyebrows) but I feel the essence of iaido is in the zanshin and any feeling of a clock ticking completely wipes away that ethereal mist and it becomes a mechanical tempo exercise instead of an emotional expression. This is something I think I would like to discuss further with other high grades and get their feelings on it.

I also noticed that towards the end of a three hour session, my legs and feet were finally starting to warm up and do their work and the whole performance became easier and sharper. I have to keep this in mind for my grading and ensure I am training right up to the examination and keeping warm while others are on. Whoever is around me, don't let me sit and watch, get me doing exercises at the back!

On Sunday after Jodo practice I did another two hour iaido session, I can't say much more than that.

So where am I with stuff...

Only 11 days, 3 hours, 17 minutes and 29 seconds to go. I received a nice good luck message from Dougie Evans the other day. I have also received lots of votes of confidence from other people as well as some disbelief that I am cramming as much training in as I can at the moment. I want to stress that for me the importance is in changing my iaido in light of the grading rather than passing 6th dan itself; the grading is a means to an end not an end unto itself. I don't mind if I don't pass (well, at least after a good cry and a beer I won't), I have trained for it, that is the most important thing and for me at least, here is the evidence of that.

Well, back to work. It's my last official iaido training session this evening before the European Iaido Championships and the grading. Shiiiiiiiiiiiiiiittttt! 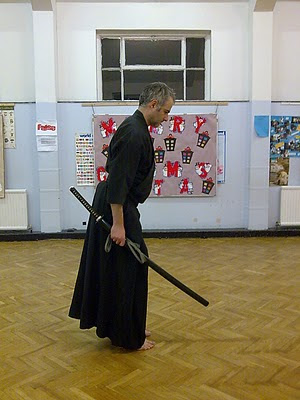