I have spent a bit of time reviewing another embu session, this one taken on 19th Jan. If I manage to get the video on the page then please excuse the French affectation in my clothing. I forgot to pack a shitagi and ended up wearing a black t-shirt underneath to the effect of looking like an 80's ninja.

Anyway, it was good to see some things are maintaining some form of quality. I was really pleased with the first draw of Morotezuki and then a bit dismayed that that didn't convert well into Sanpogiri. I will have to spend a bit of time on Wednesday working out why.
I have got to consciously work on my Noto. This analysis is very good at showing that there is something wrong, the thing wrong being that I am doing exactly what I castigate our students for - opening their thumb to do Noto! I guess I will have to relearn this aspect of iai as it is something I do on nearly every form.
Furikaburi also requires a bit of work (by that I mean a lot). I was quite surprised that my furikaburi or Mae and Ushiro are failing on a couple of critical points, most notably not going past the left ear at all. I know that I can do this right as I have done it before but maybe I am getting in a bit of a rush. 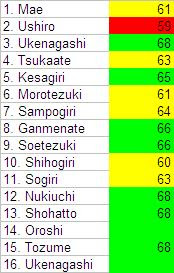 From the forms perspective, Ushiro is suffering the most, possibly because a lot of very basic elements are not working and Ushiro shows them as the worst.
Anyway, I'm going to close this review for now as I have become slightly drunk. I have uploaded the 2nd part of the embu as I can't seem to edit some of the unwanted parts of the 1st part out.
Posted by Andy Watson at 19:30 No comments:

Well it's been a relatively calm start to the training year. I have begun to use my shinken again and am ensuring that I do a very good warm up and stretch before training.
In session 41 most of my time was taken up with the beginners and it gave me a chance to slowly build up my own technique as we looked at elementary kata. It becomes very obvious that many of the problems that beginners experience is a need to rush the kata and I believe this is borne out of a feeling of being unbalanced in their posture. This is further caused by a lack of training and strength in the legs and hips. Certainly during any session, as the muscles in my lower body start to warm up and start to work I can feel the entire stability and sharpness of my form begin to improve.
We were also visited by Inbar Oren from Israel at this session so I spent a bit of time with him trying to work on various bits. It's funny that some dojo and sensei encourage loud and dynamic breathing. I have always been of the belief that the breathing should be natural and where it is required to be dynamic it should be silent. This is all possible I am sure. Anyway, horses for courses.
Session 42 I decided to get stuck into some of my own training and begun with some blind-step-cutting as I have decided to call it. I think I described this in Session 39 and have sensed two effects, one that I get better at doing the exercise myself and two that my overall kata stability has improved. The outward effect is that my posture has widened slightly and my feet are less likely to find themselves close to the same centre line in any forward posture. I may spend a Shugyo entry looking at the static physics for this at some time but not right now. During the rest of the session I did a bit of work on Okuden Suwari Waza as I think these offer some of the most difficult technical challenges in the whole of MSR. Shihogiri/Yosumi is perhaps one of the hardest forms of all, not purely through the number of opponents but in the fact that they must all be dispatched rapidly but without getting busy. This busy-ness occurs through a few different media:
I don't think anyone with an ounce of physical fitness can fail to do this form fast; to do it fast with all the elements important to a form like Seitei Mae however....well, it feels like I am strolling in the foothills of Mount Yosumi. I have seen Ishido Sensei doing the all the variations of this form and he doesn't fail at each cut to deliver a decisive and convincing dispatch at every point while linking each opponent together into one continuous form.
I do feel like my Kasumi has improved though, I don't know why but I suspect it is by me disintegrating the form slightly and ensuring that each component doesn't suffer by continuing into the next. I further believe that training in MJER at the Okehampton Seminar helped me a lot as this version of Kasumi is far more component focussed and expansive.
In Session 43 I started by helping a complete beginner, Robert, to learn Reiho and then went through Mae in staggering slowness with him although being an Aikido Yudansha he picks things up very quickly. For me to do Mae at this speed was a great technique builder for me and I could feel where the energy had to be put into the components of the form.
In my own training time I decided to work on Chuden. Chris Sensei got me to reduce the movement in my noto and it did start to feel nice and smooth. I got as far as Iwanami and the lesson drew to a close. I finished by getting George to do a little grading demo and gave him some written feedback.
I have an embu movie that George took for me on Session 42 for me to review but it is quite massive being an HD movie so I am going to close this post for now and post another one for that review.
Fair thee well.
Posted by Andy Watson at 11:03 No comments:

With the closure of our Monday night beginners class we have now incorporated about 6 new people into regular practice. Last night we received the first three. This creates a refreshing set of circumstances in terms of teaching very basic techniques again. In fact the whole dojo comes more alive when there is more than one training group rather than everybody doing the same thing. I think that part of this is that maybe the optimal teaching group size is no more than one teacher to 3 or 4 students.
It puts some of my "Project Delta" into the backseat but it is all good development for me.
I spent the first 30mins or so just correcting and providing confirmation for how to do reiho and it is amazing how much detail is in it. We then worked on Mae giving emphasis to the Jo Ha Kyu facet of the initial nukitsuke. Again, it is easy to forget how much activity is happening in this simple movement. We got stuck into Ushiro for a bit before I went down the other end of the dojo to supervise the Okuden Tachiwaza group who were murdering some Shinden Koryu.
Before I knew it, the session was up with minimal training on my part. Oh dear. Still the arm is recovering and doing even better from doing some light weight training.
Roll on next session!
Happy New Year.
Posted by Andy Watson at 15:03 No comments: