Concerning the evaluation, I have scored everything according to the database I set up and posted at one of the earlier blogs. Some people fedback to say that it was too detailed and I considered this and set out to see what useful information I could get back by going to this level of detail.

Statistics, being a large part of my work, showed where areas of relative competence were in comparison to areas of needed concentration in practice. I averaged the overall kata scores and median'd the technical scores. Each was then given a red/amber/green status depending on whether it was the worst, below average/median or above average/median. 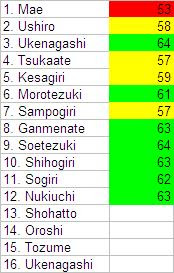 From the graphs of these scores it is easy to see how the RAG status applies: 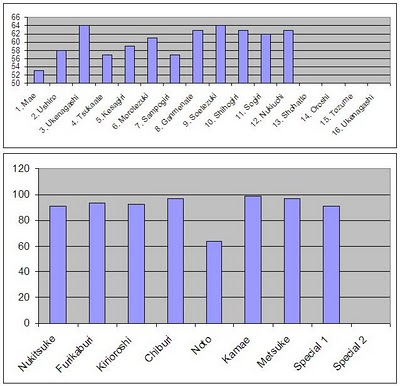 Obviously from this one session it appears that Mae and Sanpogiri need a lot more general work.
Noto can clearly be seen to be a problem from the tech scores. Of course as more data are added then some anomolies will disappear (Mae being the first form would have been the most "cold").

So, yes it does take a bit of time to review the videos, score the performance and then analyse the data. I think though the last time I did this it became easier and easier to do as well as quicker.

What other news? Oh yes, I was advised by one of the readers (Mark) of this blog that a rest would be of much use especially if I was suffering an injury. The good news is that that is exactly what I have done and my arm is slowly recovering. I actually missed last Wednesday's practice as I was a bit knackered after Poland and work that day and I think that this is all helping, as well as Xmas, to recover. I must ensure that I start to build up strength in it again though with some gently weight training over the holiday (maybe lifting beers).

I was in Poland the weekend before last and ended up having to deliver an iaido seminar singlehanded (although with the higher grades help) which had simultaneously Shinden, Jikiden, Seitei and Suioryu going on. It was a very enjoyable event (for me anyway) and good to see everyone working so hard. It is easy to spot people improving in the durations that I don't get to see them train. For me it was also an opportunity to work on stuff while I was demonstrating and teaching. The thing that came through the most was using the left hand even more during nukitsuke to get an effect on the sword. This seemed to work very well with the kissaki moving out with what felt like natural ease. I also worked a bit on Ryuto in trying to get the thing to fit a larger body.

So to conclude this entry my to-do list includes:
There! Four things to work on at the next few training sessions instead of a billion! It was worth doing the spreadsheet afterall....
Posted by Andy Watson at 13:22 1 comment:

Easy to identify a problem with standing noto now.

Pretty pleased with Soetezuki though as this used to be my least favourite form.
Posted by Andy Watson at 12:54 No comments: