I was so taken aback by the number of people that were interested in my blog that I thought I would share some files I used to help me with my 5th dan training.

I had written a Seishinkan Dojo Members Pack article on progressive training after witnessing the fairly slow lack of progress from one of our members who was trying very hard to pass their grades and I tried to study and understand what was happening. I did some research on learning patterns and wrote the chapter linked below:

I can't remember if we ever got this into the members pack but it now forms part of the BKA Level 2 Coaching Course.

I have to be honest now about my geekiness and admit that quite a lot of the above chapter was to justify me using mathematical analysis (in it's simplest form) to judge my own progress in preparing for 5th dan. As the article indicates I watched my previous weeks embu on video on Wednesday nights after training and tried to score my performance to see what elements were progressing, which were getting worse and which needed attention. I have attached this on the link below, if you can be bothered to have a look don't expect anything revelationary...

In fact I only managed to log three lots of embu before I got bored of scoring it so pedantically. However I think practicing to evaluate to such fine detail gave me a bit of a skill in doing it much more generally and pinpointing things about my performance that I should work on. I do however still think that the spreadsheet is a good way of of improving performance if one is either short of feedback opportunities or doesn't have much time to prepare for their grading. It's great for prioritising your training focus and ensuring that you don't end up doing a fantastic Mae followed by a pathetic Ukenagashi. 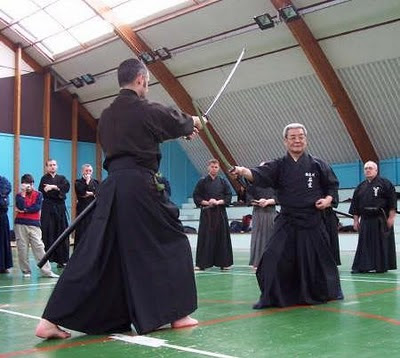 Anyway, the weekend is nearly here and I hope to be going training to Hilary's tomorrow and get a bit of time just working on my own stuff. I must also remember to look into booking a squash court out for myself somewhere locally to do some solo practice. Everyone else seems to do this except me...

I should also just add that very few of the photos I am posting on this blog are recent, they are mainly just to break up the text a bit.
Posted by Andy Watson at 10:25 No comments: