This particular Wednesday gave me the chance of some good practice with only 3 other students there. I decided to leave them alone as much as possible, do some practice and get some scrutiny.

I started on some basics and worked at Shohatto for a while until starting to become a bit dissatisfied with it. I should be honest here and state that my love for Shohatto comes from the ability to really put some dynamic and decisive zip into the last cut. The synchronising of the body movement with a more natural furikaburi allows one to make this final cut appear well and truly, final. After a bit of a thrash though I wasn't feeling the zip was there anymore and I remembered what Ishido Sensei had said only a few weeks previously - "use Koranto when in a fix and in need to sort out problems".

I did this and could feel a much more pronounced looseness in my posture to the point where the tip would bounce and lose much of its sharpness. I tried to visualise what I was doing and "spotted" my head bouncing forwards with the cut, this meaning that my upper body was doing the same and so I worked on pressing my neck into my collar during the cut. Sure enough, this straightened my upper body, extended my spine and improved the stability of my cut. I tried this in Shohatto and it proved successful. I don't like to leave things simply fixed but thought about what had caused this, I concluded that too much upper body leading on the nukitsuke was being carried through into the kirioroshi. I needed to moderate this inclination in the early part of the kata too. Once again this led me to another link in the chain of cause and effect - my hand is too high in nukitsuke and I am peering down my shoulder. Well more work to do here and at least I know what to work on. 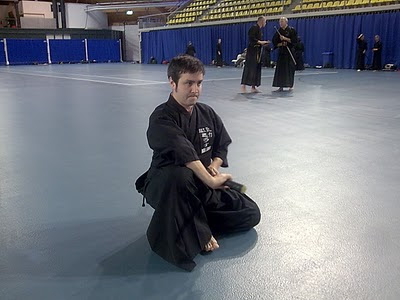 Around this point my sensei arrived and put me through some of my basic paces starting with chiburi. According to his instruction I was too used to bringing the sword to the side of my head and then lifting it over. I needed to use the elbow more proactively to bring the sword straight into position to perform ochiburi. I have summarised his teaching point below and I believe that a picture paints a thousand words so I won't try to explain it too much. The sequence on the left shows how I was doing it. It can be seen that the elbow starts moving down only to lift back up again. This causes the course of the sword (shown in red) to take several turns before going into chiburi. On the new way, the upper arm should stay in place until the forearm is virtually vertical. From thereon the elbow should be used thus straightening out the swords course. I have shown this on the right sequence below and the final image shows all the sequences overlaid to show the clearer course of the sword and arm. 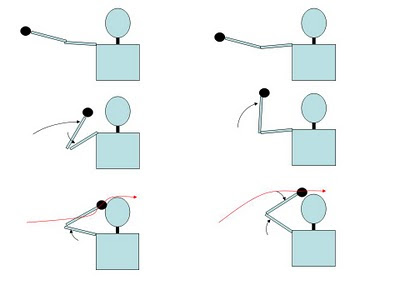 This will take some time to get used to especially as I have done quite a lot to get the right amount of flexibility in the hand to make a good chiburi.

Sensei was then kind enough to video certain parts of my forms, starting with Yokogumo. The point of this was to show where the saya control was not so smooth. The nukitsuke was okay but noto shows a) a bit of a lack of sayabiki and b) too much effort returning the koiguchi over the sword (the saya judders a bit). For you dear reader who may be grading soon, please observe the amount of sayabiki on nukitsuke as this is how it should be...

I was quite pleased with my foot positioning on this form, I just hope the 6th dan grading panelists have got mirrors to watch my kata from the rear!

The next point was noto on standing forms such as Sanpogiri. See below:


From this I gleaned:
This last point was the reason for me being filmed. While I am able to moderate my right hand movement on noto I am using the body too much and not the left hand enough to do sayabiki. This needs some augmentation including lowering the right hand objective position as well as ensuring that the course is 45degs out to the right front instead of 25degs.

What else did I do?

Oh yes, a more smooth sword drawing in Seichuto and thus moving away from the basics slightly. Did some target practice on Ukigumo with a chair and my bag, I may well bring a cardboard box down next week to practice kata Chudan 4-6 on to make sure I am doing it right.