Oops, I let this one go by a bit too long, 5 days is a long time to remember what one did in a few hours.

Chris Sensei got there at normal time and got everyone to do continuous five-form embu. I started by going through seitei 1-5 and then only progressed the other kata if I was generally satisfied with the katas in the set. If not then I would include them in the next set. It took quite a long time to reach even no.10. I included Mae and Ukenagashi each time these being probably the most useful and most difficult respectively.

Sensei worked on my footwork on Ukenagashi quite a lot, this has become a bit of an institution and I wonder how long it will last. I am referring to the need to plant the left foot somewhere along the shin of the right let rather than at the right knee. To me it seems a little academic that one should try to rise almost completely vertical. I realise the need to not get thrown out to the right but seriously, if someone is coming in like a fighter jet I don't really think they are going to have time to be impressed with your ability to stand like a pole dancer.

Still I carried on working on it and it did reveal some interesting points about feet preparation.

I have also been working on noto especially regarding kojiri control as mine tends to flick in random directions at the point of saya-iri. I find if I concentrate on all the positions and vectors of the left hand then it tends to improve as well as slowing it down enough. 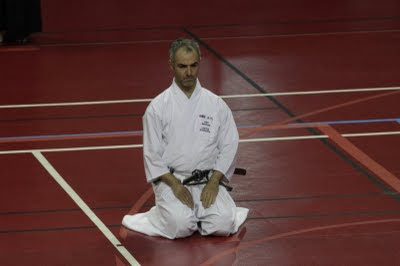 Been really working on using the right parts of the foot on Sanpogiri and it is improving it nicely. The final turn and step especially work better when the ball of the foot is engaged.

Sogiri was a bit of a pain tonight and I revealed to myself that I really don't like the first kizeme bit. Sensei told me to execute it as I would in Somakuri and that seemed to "real" it up a bit.

I had to leave a bit early so not much more done than that.
Posted by Andy Watson at 09:46 2 comments: