So I went to Hilary's Saturday class on Saturday and Chris Sensei turned up as well. After some more spontaneous cutting practice (that is to get the cut timing developed from good preparation rather than a conscious decision) he sent Hilary and me down the end of the dojo to monitor each other's practice.

I wanted to make use of the floor markings here and see if I was crabbing over to one side or t'other. Sure enough as I practiced Mae I was creeping over to the right, not by much but enough to make me wonder why it was the right side consistently. I sat down again on the line and even then felt that I somehow wasn't aligned. I looked down and there the line was, equally spaced between my knees but still I felt I was askew. I sat up more straight, still feeling askew. I finally looked behind me and noticed that my big toes were just slightly off the centre of the line. Correcting this brought me back onto the straight.

I was amazed at how such a pedentic and minor adjustment would change how much alignment I would feel.

So anyway, onto the kata...

I realise, as most people do I'm sure, that the pulling up of the knee during furikaburi is the major cause of lateral shift (as well as worth making an inclusion in the grading criteria for Ushiro!). Furthermore, the first action of the right footing moving out during nukitsuke can significantly add to that.

I tried working on nukitsuke as well to try to stabilize it, working on the tame that Chris Sensei and Peter West Sensei had mentioned to me.

I should here now explain the origins of a phrase that myself and Steve Boyes came up with some years ago to describe my next quandry. The phrase we created was "pulling a Eugene" and came from Eugene Herrigel's book Zen and the Art of Archery. In the book he describes how, in order to create a feeling of spontanaity and the moment of an action from within, he would release the string of his bow very gradually with the thumb until the tension overcame the friction and let fly. Eugene felt this was exactly what his master was talking about. The string would release effortlessly at a timing that always surprised Eugene. It felt right, it looked right, it must have been right. 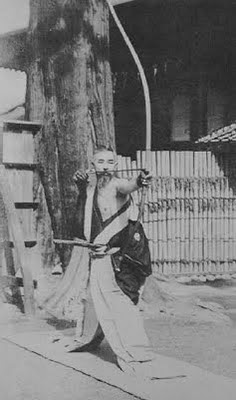 One day his master was watching him practice and he asked to see him release an arrow again. Eugene proudly demonstrated his new-found skill and let one fly. His master thanked him, took the bow off him and sat down with his back to Eugene meaning the lesson had ended. Eugene later found out that the master wished him to leave the class if Eugene was going to cheat him. Suffice to say Eugene learned that artificial means to achieving a misinterpreted end were not part of the way.

Anyway, Steve Boyes and I coined this phrase to mean trying to achieve something that actually required dedicated training by doing something a bit iffy as a short cut (we discovered a lot of these - not to say these were the right things to do, they were cheats that didn't work in the long run).

So back to the main story, I am thus very wary of Pulling A Eugene in budo training, anything that sounds like a sneaky fix usually doesn't work. The particular situation in question is when to move the foot forwards when performing nukitsuke - every teacher has a different opinion I should add! Some will say the foot should be in place before sayabanare so that the sword travels with stability. Some say that the kissaki and foot should move at the same time so that you're not in a position to be cut waiting for your kissaki to catch up. My own sensei's opinion, and the one that I stick to is now that we should be able to do ALL of the timings including getting the kissaki flying to make contact and to finish moving as the front foot finishes. Anyway, I experimented with getting the foot into position earlier and hey presto, my kissaki travelled in a beautiful flat arc and finished at the exact right place. Hurrah, I thought. Uh oh, thought the devil within. 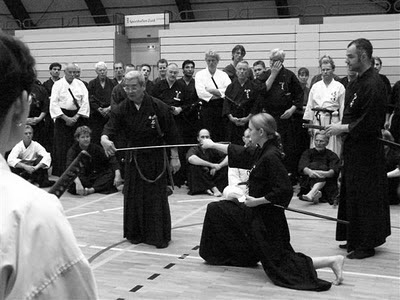 I am aware now that I may be committing half a pulling of a Eugene on this as I believe that for Chuden the sword must be quickly on its way and the body has to catch up. For Seitei this isn't specified so anything other than which gets broadcast from the ZNKR central seminar is purely opinion and, I think, depends on level.

Anyway, I'm spending too much type on too specific a point for now. Hilary and I were asked to work on other kata and it became clear that in order for me to sharpen up my iaido I would have to smooth off some of my cutting (especially going through furikaburi) in order to reduce the lengthiness of my form. This is something I am now working on through my okuden practice and will probably write about a bit later.
Posted by Andy Watson at 09:33 No comments: