I guess part of the reason for this blog is to identify inspirational moments in my training; hopefully those items of clarity that occur and will make the difference between me being a 5th dan and a 6th dan (or a rock and gonad as some of my dojo peers would say) will become either more manifest in my form as I write about them and consign them to memory or will give me a record to look back at in order to set my direction in the future. As one progresses in their chosen art I believe those moments appear to become more rare, almost as if you are running out of diamonds scattered in the rough. Perhaps those enlightening moments change in their nature, becoming less about learning and understanding a point which is explained to you or discovering something you are doing wrong and more about realising the expediency and efficiency of "good" toho (swordsmanship or sword methodology) through training and research alone. The surprises get generated from the inside rather from the outside.

But why blog them?

Why not just write them down privately?

I have to take these questions seriously if I am to take my own 6th dan preparatory training with any sense of honesty and not just consider the shinsa to be another stripe on the sleeves following a foregone conclusion of me passing - I sincerely don't believe this is the case and even if there was a guarantee of leniency to the degree that I need not do much more than turn up for the shinsa, this is not how I want to take my 6th dan grading. Just as it did for my 5th dan, I want it to change the way that I do iaido. 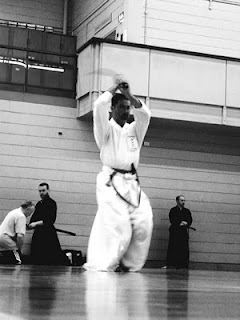 Perversely, maybe I am seeking feedback from people who read this blog to the point that it becomes useful. If that is the case then it is a fairly new concept for me. I don't go out my way to get feedback from people, I prefer to train in iaido by myself and listen and filter general teachings of iaido to a larger population, discarding that which I don't believe and incorporating that which I do. I am quite keen on self-critique of my iaido by reviewing a videoed training session than have people tell me what I am doing wrong - arrogant I know, but it's just who I am.

I hope that the opening of my eyes and ears for feedback is one of the reasons why I blog this and that it marks a change in the way I train. Anyway with this confession now firmly in the conscious ether, and possibly forgotten, on we go with diairy (get it?).

On this Saturday I got myself to Hilary's dojo for a hopeful stab at some undisturbed practice and thankfully she put me down the end with the other gradees so I could get stuck in with some training. This was after a bit of cutty practice during which I was quite glad to notice that the extra arm-strengthening exercises I am doing (including climbing) is reducing the tendonitis in my right arm. During zengo giri practice (or cutty forwards to chin, cutty back to tummy as it is more popularly known) I spent a bit more focus in feeling the cut becoming a reaction of tension in my lower frontal abdomen. It becomes very interesting to leave your arms out of your conscious control and become aware of the action of the feet and the tension in your tummy. I found my whole lower body feeling like it was taking a tightness-relieving morning stretch. There was muscular tension but in a nice way, my legs felt poised to spring and the cutting rhythm started to run away with itself. I found myself at the end a little out of breath but it was in such a good way, no pain in my arms or joints, just the feeling of a good workout and stretch. I have expressed a rather negative view on Kendo World concerning the supposed benefits of ken-suburi practice and I still stand by it. Only now after quite a few years of training can I actually feel the benefits of suburi practice (I mean from doing suburi right now) and I believe more and more that it isn't a simple exercise for all the class to do in an uncontructed manner. It is something that should be trained in very precisely and consciously even if the minimal result of RSI-avoidance is to be achieved. In fact I believe that it is such a critical maker-or-breaker of ones technique that it should be discouraged from practice unless under the supervision of somebody of either a mid-high grade or experienced enough to know the difference between good and bad practice. I won't even begin to harp on about the dangers of doing repetitive o-chiburi practice without care and supervision...

We divided into training areas and I jumped down with the other grading candidates, Alex and Andy. In the last couple of days or so I have been giving more thought to my koryu kata for the grading and I have recently been corrected about the shitei waza - it is two koryu and three seitei - thank you Peter!

Now that shohatto has become a decided form for me (perhaps unless Mae is a shitei waza) this leaves me only one more kata and I have decided to leave my options open until the shitei waza are determined. By this I mean I am going to focus on a selection of koryu and will follow the following rationale:

Anyway I am pretty sure that the shitei waza will influence my choice of koryu on the day but I have now narrowed it down to:

This may sound very obsessive to have such a strict preparation of form selection in place but it is currently important to me that I am not focussing on only one or two koryu and discarding my practice of the rest of them. I don't believe in being the thing which I think is called something like "sanbon nanadan" or in my case "nihon rokudan" i.e. a person that passes a kodansha grading knowing only 2 or 3 koryu. My own set of beliefs include that if you are taking a 6th dan grading (or 5th or 4th for that matter) that you should have a 6th dan ability of the entire koryu level that is appropriate at that time. That is, 4th dans should be demonstrating a 4th dan level of skill of shoden, 5th dans showing an even better ability of shoden/chuden and 6th dans showing a further higher level of chuden/okuden. From that, the candidate selects their favourite kata from that set but not disregarding the fact that all the kata at that level should be passable for the grade they are going for - that is, reach the grade level you are going for and then demonstrate one step even higher. 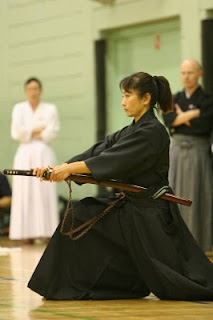 Therefore I have quite a workload ahead of me. In all honesty I don't think I will be able to demonstrate 6th dan'ness in all the MSR koryu by the time of my grading but that will be my training objective even if I don't achieve it.

Anyway, back to the lesson today, I went through the aforementioned koryu and most of seitei. I am still sensitive to this misalignment when sitting forward in seiza and today I checked my toes and sure enough they weren't aligned with the centreline properly. In Mae and from nukitsuke I tried to drive my front knee forwards (as advised by a 7th dan reader of this blog) to stop myself crabbing. This seemed to work quite well but I then found my hips were dropping as I wasn't propelling my rear thigh and hip forwards strongly enough. My sempai of yonder, Alan Nash, always told people to drive their hips strongly forwards when performing furikaburi and I am now acutely aware that I am lacking in action in this particular area. I really need to take on board some of the advice I was dishing out to one of Hilary's students today about the lower body and forgetting what the arms are doing - but for that I need some training time for myself, I need to forget about the sword, I need to make some mistakes and learn from them, I need.....an enclosed squash court (and some money to pay for it)!

My quick and dirty evaluation of my Seitei in general today was thus:
(BTW, future potential taikai opponents, if you are planning to use the above points to plan your training to beat me at my weak forms...DON'T BOTHER...just because I think certain forms are bad it doesn't mean that other people don't say to me "that's your best form!") ;-P

After a bit of a hack I was becoming more aware of the carnage going on around me and decided to do that most popular of iaido self-development methods - imposing your opinions on others. Today was quite useful actually as a lot of people were doing seitei and that is definately one of the best arenas for examining your own basic technique and understanding how bits of the body activate movements. One particular point of interest was the crabbing issue in Mae/Shohatto. One of the readers of this blog (I won't mention your name, Dan) found his right foot going out too far to the right as he stepped out and forwards. I showed him that not only did his knees have to come together during nukitsuke but his ankles had to separate slightly more when elevating his feet into a toes-under position. This would get the shins more parallel than they were and thus improve the positioning of the front foot. I smugly showed him the answer and then made a mental note to check if I was making this same mistake next time....

Anyway, I guess that's the end of this slightly extended post. Jodo tomorrow....
Posted by Andy Watson at 18:45 2 comments: