Quite a nice quiet class tonight so that I could work on my own stuff and have some beginner's presence to keep me on the basics. One of the things that stuck in my memory of this evening was demonstrating how the feet need to assume the cutting position just a slight moment before the cut is delivered thus ensuring stability. My nukitsuke in one demonstration just seemed to fly out on a really regular arc once I had ensured that my right foot wasn't moving during the actual drawing action. This is definitely something I need to work on more so that it happens when I train at regular speed. It is something which adds to the technical challenge in that obviously you shouldn't be standing there for a second while your sword lags behind but equally it makes no sense to try and draw and cut when you don't have a secure posture.
I used the evaluation of the last embu video as well to fix some other things such as making sure that I didn't open my thumb when I did noto. I realise that this is actually quite a deeply embedded bad habit as it felt quite foreign to do it right. Looking around I saw lots of other people doing it with this bad habit as well - oh well, at least they're keeping in line...
One of the things I really wanted to get right was the upper cut of Kesagiri as well as I had realised that while it might feel really good to swish the sword up and down in one action, most of the time I am not actually making a cut on the upward action, the monouchi is in fact following along the same path as the tsuka more or less. Once I tried to ensure that the kissaki was actually moving forward into the cut then this did two things:
1. I could hear the tachikaze - a good sign that I was cutting
2. It gave me ample time to join this with the rising left hand and establish a grip for the downward cut.
In fact it felt like there was time to do a kata (would'ya believe it?) rather than just a flurry of movement a question mark left hanging in the air. I have tried to demonstrate this difference of movement in the image below. 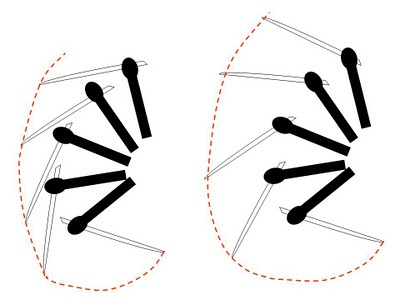 I was also able to work on the first cut on Sanpogiri which bothered me that it is far too small. This is a difficult one, easy to do in a linear action such as Morotezuki, more difficult to do when your body has to enter inside the movement. I will work on this more at the next session.
I am trying to incorporate a lot of Chuden into my training at the moment as I find this one of the best leg strength developers in iai. Toraissoku is my kindly nemesis which is training me to get my big ass up and moving. Quite often this kata doesn't come to life until after a good 20 minutes of solid repetition. Once that is working better then Inazuma seems a lot easier. Chris Sensei told me that my final cut of Inazuma was too dependent on my body and left me to work that out. I realised what he meant after a while and started to ensure that my metsuke was kept correct during this dropping and cutting action and that seemed to work (well, he said that was better anyway).
I have been working on one of the Okuden kaewaza versions of Ukenagashi as this might be a selected koryu if I have to pull one out of the hat. It is one which I feel I can do quite well (a right foot seme-seme-seme then a "leap" off the line to deflect and cut in one action while still keeping the right foot forwards). It is the fact that I feel good about this form and that I get very little feedback on it that is now bothering me. I think I will have to get Ishido Sensei to give me some feedback to work on this at the next opportunity.
Anyway, till next time.
...ooh, thought I would post this rather entertaining photo of a couple of BKA peeps a whole lifetime and hairstyle ago... 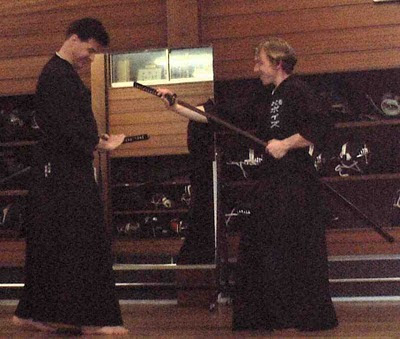