Why does Chuden make so many references to clouds? Because I've discovered that you need to climb mountains into the clouds to get your legs strong enough to do the bloody forms! 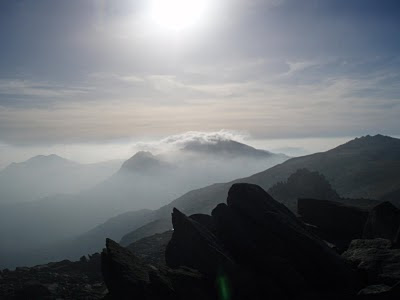 Prior to this training session I had spent the weekend hiking and scrambling up a few Welsh peaks with some friends. Though I missed a Jodo training session having this nice time away it does have the effect of strengthening up my legs and hips, or more likely, reminding me how pudgey I am becoming sitting at a desk.

This Wednesday in question, we were visited by Aram from NY who is an absolute gentleman and it is always great to have him train with us.

We started going through the seitei in front and back sequence as before and I do find this order to be of benefit in waking up the brain a bit. Each kata starts to become an individual challenge rather than just another step in the sequence.

I noticed that Aram's cutting, while quite powerful, tended to bounce at the bottom of the cut thus inclining his body forwards in a slightly jerky motion so I spent some time with him getting him to put the power into the right place (i.e. at the commencement of the cut) and avoid forcing it through the vertical stroke. The use of tenouchi to motivate the cut, to focus the cut and to brake the cut is so important and I am finding it more difficult to teach these points as it starts to become second nature. I realise that there is a slight difference in emphasis between Ishido Sensei (who I learned this tenouchi from) and Oshita Sensei, however both use a graduated tenouchi to control the sword and I think that this is something vitally missed by lots of people. There is a lot of talk of using tenouchi and shibori at the point of the sword hitting the opponent's head but this kind of misses the point. 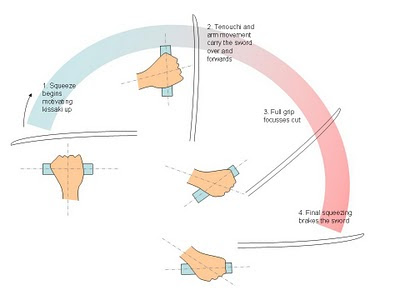 (Note, images will enlarge if clicked)

Tenouchi is a continuous action of adding energy to the sword (and I mean the literal physics-based energy, not the woo-woo) starting by moving the sword, accelerating the sword, focussing the power of the sword and braking the sword. These are all smooth transitions and can be easily emulated in "normal life" - try:

a) shaking an umbrella
b) hammering in a nail

If you are confident and competent in both these activities then you will spot the parts of tenouchi being used to certain degrees. When I learned how to do kirioshi from Ishido Sensei it became very obvious that the arms (and by that I really mean the shoulders) do less and less work and rely more on the inertia of the sword being driven by the tenouchi than by rotational kinetics.

Anyway, this coaching session went on for nearly 30 minutes and I found various things that Aram was doing which was causing problems, one being pulling the rear foot up with too much effort.

I interspursed this with working on my Chuden which felt much smoother with my legs feeling a bit stronger. I hope to continue some kind of regular exercise to keep this muscle firmanent in place. My sensei pointed out that my left hand wasn't being used properly in Yokochiburi and I have to train this tomorrow at the Saturday class. Not enough to simply place the left hand on the hip: it has to utilise as much energy as the right hand.
Posted by Andy Watson at 17:47 1 comment: