I should add here the purpose of this blog. At the moment it is to be something of a training diary for my 6th dan Iaido grading which I am due to take in the UK in summer 2011. It's still a year and a half away but I really want to make sure that my "transition" to 6th dan has a meaning and a tangible change (hopefully for the better).

My own rules for this blog are:
Anyway down to business...

I set in my own mind to actively start my 6th dan iaido training last night at our regular Wednesday practice. Now the weather is a little bit better I am trying to strengthen up my arms as well as improve my fitness by going out in the garden and doing 75 cuts left and right with a suburito. I think up to now my home training has focussed on embedding the Jodo koryu curriculum in my mind but I think I now have to pay more that the slightly casual level of attention to Iaido.

Thinking back to my 5th dan Iaido grading preparation I had the luxury of being able to be left alone and asking Tony Brocklebank, one of the dojo seniors, to video my embu nearly on a weekly basis for me to take home and study in huge amounts of detail even to the extent of plotting my perceived progress in the various elements of the kata on a spreadsheet. I don't think I will have as much free time to do that now so I must ensure that every moment of training time is used properly.

My first question to my sensei, Chris Mansfield, last night was to ask what was the first kata he recommended for my first koryu form. As I expected he said for me to do Shohatto, the best and most appropriate kata for a Shinden iaidoka doing an Iaido embu. 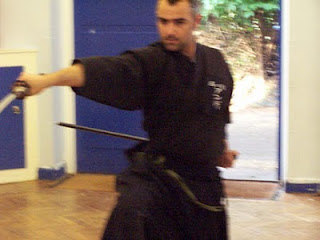 I worked on trying to improve my stability during this session. Sensei talked to me for quite a while about the difference between 6th dan and 5th dan and I remember the thing he emphasised most was having a clear understanding and contrast of the "when" factor i.e. timing of the kata. He made me do some cutting exercises to work out how making conscious decision on cutting didn't always work and in fact having a "feeling" of preparation would lead into a well timed cut.

We also looked at my performance of Yukizure. Again he noted that my preparation was late and that the whole kata could be sharpened up by quietly preparing earlier and then making the entire first cut happen in one cohesive, well-timed movement. I then had to focus on metsuke for the second cut as well as sharpening and shortening this movement. Having just practiced this outside I feel at the moment that I should avoid the "inashi" action and focus on two distinct cuts instead but linking them with good awareness and metsuke.

So anyway, that's probably enough for this first posting although I would like to write down here my current choice candidates for my three koryu:
In terms of those seiteigata that I need to work on:
More later...
Posted by Andy Watson at 22:36 No comments: