The Four Levels of Zanshin

Just thought I would record here the learning points from the Eindhoven summer seminar concerning zanshin from Ishido Sensei.

The explanation came up while Sensei was trying to get a better expression of zanshin in various parts of the kata when other people demonstrated. Two particular fine methods, both relating to the assumption of jodan no kamae, were explained. The first involved Ishido Sensei standing in chudan awase with the exponent, a position from which the student had to take jodan no kamae without allowing an opening. This created an incredibly sticky feeling in the movement and the student being extremely focused on the person in front of him. In the second instance and relating to Shihogiri (and could be adapted to Sanpogiri easily) he arranged four people around the exponent where the imaginary opponents would have fallen. Given the necessary close proximity of these opponents, this created a very congested area to move around in and more affected the finishing parts of taking jodan no kamae. 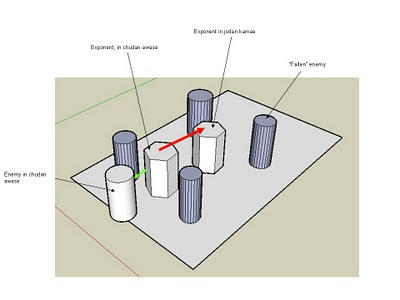 The diagram shown is the best I can do to summarise the ideal scenario for getting some practice in this with five other helpful dojo members. I must try it when there is a free and quiet moment.


To follow this explanation, Sensei went onto describe the various levels of zanshin affecting mind and body, they are as follows (in order of "depth"):


The last of course raised quite a laff!

Anyway, back to work.
Posted by Andy Watson at 12:45 No comments: