It's barely credible that I am writing this given all the computer nonsense I have had to get through over the last week. Still, at least I don't have to buy a new Mac as I might have done if the power cut had kicked in as it did.... :-P

Before getting on about Koryu blah I want to reflect on a question I posed to the group last night. What I saw was that some students were doing Seitei Nukiuchi very very quickly and being the sceptical type that I am I wondered how and why this was happening. I asked if everybody thought that the purpose of Nukiuchi was to dodge out and back as quickly as possible. Nearly everyone thought yes. I responded by saying that this might well be the case but if it was so then it was the only form in the entire Seitei and MSR koryu set that had this as a feature. They looked puzzled. Surely, I said, it was important to gauge the timing right and currently it looked like the Tasmanian Devils in the class weren't giving any thought to the timing. Now I think about this more I can see this argument/discussion on this form looping back to something very fundemental and basic which I will get to shortly.

Last week while working on this form I informed the class that many of them were not moving their right foot back adequately to avoid the enemy's cut. Most of them had sorted that out this week. I discussed with them briefly that surely there must be a 'development' of speed at the apex of the draw up and back. It is possible to do this form very sharply especially if one aims to squeeze the kensen up to horizontal as sayabanare occurs instead of leaving it at it's drawn angle i.e. hanging down the back. If one is nimble footed as well it's possible to do this form during the echo of a clap. The question I ask is, should you?

With this form, the course of the enemy's sword is not specified however it is unlikely that it is a vertical cut stopping at horizontal albeit it might be possible to cut your enemy's head without you skewering your belly on their sword but this is a tad risky. Of course, this is as much a Toho form as any other so in reality one might dodge and enter from the left or right but keeping to the prescribed form as much as possible it becomes more viable to imagine the enemy making a horizontal cut or a kesa cut. Once their cut has cleared your entry path then the counter cut should take place pretty quickly. If we imagine the kesa cut, there is a time between the enemy's sword just missing your shoulder and passing across your body to clear at the hip. One can imagine doing this perfectly by the body just evading at the right moment and using this short period of the sword passing by to evade the rest of the body, prepare the sword and deliver the counter-cut. Easy-peasy. My problem is that I don't even think people are mentally visualising this.

In a way not dissimilar to Jodo's Tai Hazushi Uchi, there surely has to be a precise moment of actually clearing the opponent's sword. I'm not suggesting that this should be a long time and definately not suggesting that one should stop but should there not be a contracted moment of tame?

I did a little hunt around the net to find examples of Nukiuchi and I was delighted to find this demonstration by Yossi Luria Sensei of Israel who I hope doesn't mind me using his demo video project here... 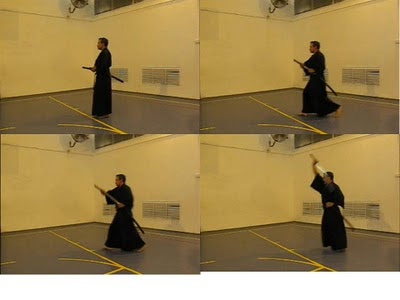 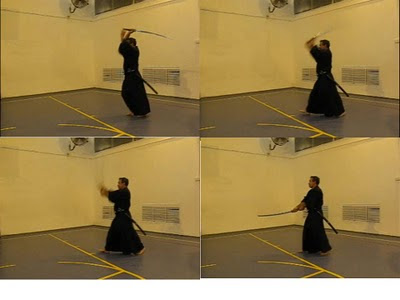 Yes I realise it would be very easy to critisize this demo as it would be to do so for anyone's videod performance but this demo actually says a lot. There is a definate moment when some work is being done at the apex of the draw and this is just enough in my mind to show that point of tame.

Anyway, I mentioned earlier that I would show how this loops back to basics and fundementals of this forms and here it is...

There you have it, the seen and unseen reasons for working on timing on this form rather than raw speed.

Anyway, we spent a bit of time on Yukizure and Rentatsu, these being quite technically complex forms considering how simple they look. I wanted to stress to the kodanshas that the body position and sword position remains virtually unchanged in the draw of Yukizure. This can be seen below in that the body and sword are already in the correct position for the finish of the drawing cut. 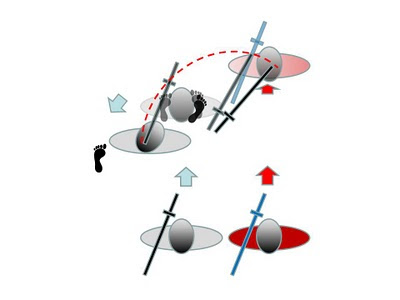 The feet take a natural position for this draw, not dissimilar to Soetezuki although not quite a turned around as the seitei form. With the head turning into the metsuke only, this movement is quite minimalist in nature but allows a smooth and discreet transition into the first and second cut.

Anyway, back to rebuilding my compyoota...
Posted by Andy Watson at 12:14 1 comment: