Some part of me is hesitant to write about this particular subject as my thoughts on it sit more comfortably with Jodo than with Iaido. Why is this? Iaido, by it's nature where the effectiveness of technique is sometimes difficult to test, generally tends to be far more detailed and technically strict in it's teachings. Jodo, on the other hand, while not lenient in the area of technical correctness, is more forgiving in it's allowances for personal physical interpretation providing the effectiveness of technique is convincing. It is not the absence of flexibility in Iaido which makes me reluctant to write this in an iai context but rather the tendency towards uniformity. Perhaps if I didn't do Jodo I wouldn't feel the same way. Anyway, getting on...

I want to reflect on some thoughts I had while flying to Poland recently and getting towards the end of the book "Last Chance to See" by Douglas Adams and Mark Carwardine. Those of you who have read it or are familiar with Douglas's works will know that the book is an account of their project to see and record species which are approaching extinction. In one part of the book Douglas recounts an earlier visit to Japan where he had the occasion to see Kinkajuji, the temple of the golden pavillion in Kyoto. His tour guide informs him that the building dates back to the 14th century. Douglas mentioned that it was incredible that a building so old should continue to look so spectacular. The tour guide responded that the building itself had been rebuilt numerous times, sometimes because of fire, sometimes because of general degradation. Douglas challenged the tour guide on this saying that surely then this isn't the original building. "Oh yes, it's the same building. Exactly the same as from the 14th century and it's been rebuilt many times." Douglas concludes, quite nicely in the book, that this is a contrast in the way of thinking between the East and the West. In the West we tend to attribute the permanence and age of a building by it's physical materials in the walls, the pillars, the bricks, the roof, the floors etc. In Japan at least, the building is a manifestation of a design, an intended use, an image that an architect may have dreamed up. No permanance or nature is given to the materials of the building itself. The building lives and exists through it's form through design and it's use. 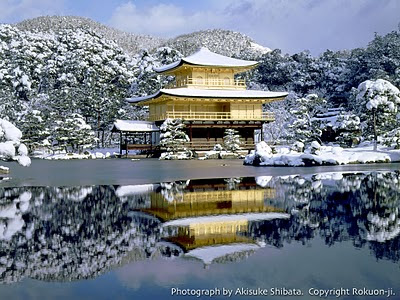 This is connected to the tradition and process of "Kiyome" or purification. Whole shrines and temples are dismantled and their materials renewed. Much work goes into ensuring that the "new" building matches the previous design as closely as possible. Often the work is carried out with the assistance of the monks and priests of the site. We might interpret this as refurbishment when it comes to buildings but this is a skeletal image of what actually happens. Through this process the building is regenerated, given a fresh life and most of all, purified but loses none of the original dream of the designer.

The underlying principal in all this is that the nature of the temple or the shrine is in "the intention of the architect" and this is a phrase I would like to use when thinking about how kata must inevitably vary as they are passed from generation to generation, from varying physical body to varying physical body, from personal mind to personal mind. Where experiences and the environment change the visible material of the kata. So what is the Ryu if the "software" goes through such inevitable change? Surely only the intention of the architect.

To explore this further perhaps it is important to make distinction between the two "tendencies" of kata with regards to Iaido. In one extreme, a kata may have been the result of an actual combatitive experience and the survivor of this experience may have thought that what action actually saved the day was worthy of preserving and teaching to others. In this sense, the technique is a wholly practical one and is the response to a certain situation. This might be referred to as a "Jokyo Kata" (situational kata). In the other extreme, an experienced swordsman might have recognised that certain "exercises" in technique, timing and movement within a mental context would facilitate the creation of a well-rounded martial artist where nearly any situation might call upon the range of well developed techniques to save the exponent. These are referred to as "Toho Kata" (sword methodology kata). Some people actually divide kata up into these two category; some consider all kata in a style to be either one or the other; some consider that all kata are Toho but have to be learned through the context of Jokyo, the latter of which should be essentially cast aside as soon as it's use subsides. I fall into that category of people who believe that the last interpretation is the most accurate.

In any case, even with the most attentive of soke of a style, change is inevitable in a ryuha. While we may spend sleepness nights worrying about this (or not) I believe the grace of it all is in believing that each stage of a kata being passed from one person to another is another phase of Kiyome, of ritual purification where the architect's intent is transmitted and the materials renewed. In this case it is not realistic for a teacher to assume that even the best student should produce a carbon copy of his taught form. By passing a kata from an elderly teacher to a younger student, the kata may become invigorated with youthful energy. It may lack some of the smoothness of well trod wooden floor boards but provided the architect's intentions are preserved, Kiyome has taken place without detriment to the design.

A good example of this is the contrast between Ishido Sensei and his main student Morishima Sensei. The two of them are separated by about twenty years in age, Morishima is a bit taller than Ishido Sensei. Their koryu are slightly different, the former being quick and light, the latter being large and vigorous. You can see slight variations in their delivery of form and often one will favour a different kaewaza to another but the similarities are very deep. You can see how Morishima Sensei has embedded critical factors taught to him by his own sensei but which have been smoothed and moderated by the elder. Even greater contrasts are obviously visible between Ishido Sensei and his European Monjin where body build, transmission variances and lifestyle differences have created sets of interesting variations, each containing some aspect of Ishido Sensei and all with a larger or lesser emphasis.

Maybe this is what we judge when we observer others' performance. Some will be able to display the architect's intentions very clearly, some will have more subtle and smoother features to be viewed. Some, who have misinterpreted or never understood the intentions, might be viewed with critical eyes regardless of how vigorous, strong or fast they are. Lucy Earley explained to me recently that Ishido Sensei performs the draw in Batto/Nukiuchi quite slowly and smoothly these days. He used to show off a bit with how quickly he could do this draw. Both ways of making this sudden draw are surely valid, one fast to the point of being invisible, one so smooth and subtle that it is unnoticeable and thereby it's a fine, fine thing that Iaido is available to everyone regardless of their strengths or limitations.

I do not imagine for a minute that I will ever be able to do Iaido as well as or better than Ishido Sensei but maybe in trying to replicate his splendid halls of stone, my brick-built toilet block will suffice...
Posted by Andy Watson at 10:17 4 comments:

Last Wednesday we spent another evening devoted to shinsa training through embu. I like this kind of solid practise and it stops me being distracted by other people.

Key points for me to remember:

Ochiburi took a lot of hammering this evening and my legs and elbow felt it the next day. I am working to try to get the right hand to move more directly to the objective position rather than orbiting over and around my head. It's funny because I have been trying to get Lucy to do this for ages and now I am working on it myself. Shohatto as a whole is starting to feel more solid now that my focus is on footwork and I need to train ochiburi so that it becomes a favourite part of the kata rather than an Achilles heel (much like Soetezuki used to be for me).

I think the time is getting close to having another video review and then maybe take a break from the shinsa training to do some broader koryu training. I would like to ensure that my koryu kata for the grading are the "best of the bunch" rather than the few I could manage...

More coming up in a separate post...
Posted by Andy Watson at 10:06 No comments: