A Thanks to Murakami Sensei (and how to make Ochiburi easy)

Well that was quite a lull wasn’t it? I guess I haven’t been actually that busy with training for a while and the time I have spent in the dojo has been mostly about helping others. Our dojo suddenly seems full of newish people, space is in demand and I generally default into the helping position when it gets congested.

I would like to share one point though that was conveyed to me by Murakami Sensei during his visit to Wroclaw recently. As I may have mentioned, this was the first time for me to meet him and his dojo members and it was a very enjoyable few days. What comes across very clear from Murakami Sensei is that very little of what he does he does simply because someone has told him so. It is very obvious that he is no stranger to hard and vigorous training and everything he demonstrates he does so with an air of something very well grounded in. He does iaido and jodo as it works for him, a lot of which I’m sure is because he has applied himself so hard to learning but the outward appearance isn’t that he has great difficulty doing anything that he demonstrates. 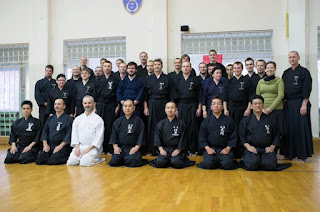 One thing which stuck with me was his very interesting explanation of ochiburi and how it makes it much easier to do. I would like to start this explanation with a premise concerning a particular point within the ochiburi action and if you don’t already do it this way then this post might not be very helpful. That premise is that between the point from the arm being stretched out to the right to the point where it brings the sword close to the head that the grip should relax so that the potential to do tenouchi is created. I realise that the absence of this premise is that the right hand holds the sword very stiffly maintaining an elevated kensen throughout this action. I don’t personally believe that that way of doing it is natural or necessary if the physical action of chiburi is to shake the blood from the sword (regardless of whether that literal interpretation is practical or not).

What has always been a difficulty for me though is maintaining some semblance of kissaki control during this action, typically with the kissaki waving to the left and right so that it goes behind my head and then back to the outside as the grip starts to engage. Through the transition from the position of the right arm being outstretched to holding the sword near the temple the following conditions must be maintained (or so I have been taught):

1.       The kensen must not drop below horizontal
2.       The kensen should not waiver to the left and right but should remain at roughly the same relative position to the hand
3.       The grip should relax so that tenouchi can be used to actually make the chiburi cutting action

Murakami explained that the seiteigata method of doing this was to ensure the the kensen projects out to the side when the right arm is outstretched, essentially meaning that the right hand grip doesn’t change from the end of the kirioroshi.  He further outlined that it was koryu methodology that required the kensen going straight back but seitei should have the sword kept out to the side (see images below). 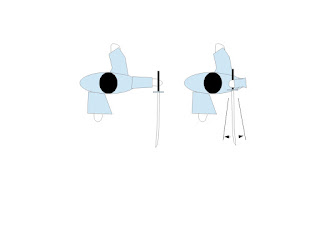 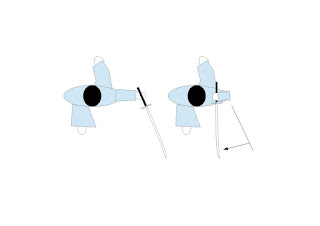 The images above don’t of course show the final position by the side of the head with the tsukagashira towards the front of the right eye but I’m sure you get the meaning.

Anyway, by actively making the kensen adjust from an oblique position to a straighter position during the movement from outstretched to the temple this tends to keep the kensen in a much tighter control that is, it is easier to control the position by actively moving it rather than trying to keep it relatively still. Simple though this revelation was it fairly well fixed a problem that didn’t seem to be going away. Such is life with long arms and a long sword.

I think now even in shoden I will try to provide a small part of this movement even though I try to keep the movement more fluid.

I don’t believe it is explicitly written in the ZNKR seitei manual that ochiburi must be performed like this, it sounds like something transmitted orally and learned through good training which is the thing that is so obvious with Murakami Sensei, he appears like a keiko workhorse.

Shortly after this seminar Murakami Sensei with his brother won the All Japan Jodo Championships for 7th dan, an acclaim which I think must be well deserved. There were some aspects of his technical methodology in both iaido and jodo which I had not come across before and even where it was slightly counter to my study lineage it was all worth trying, incorporating and finding useful aspects for one’s own technique. His compact but devastating hikiotoshi demonstrated to me how important it was to keep one’s body angle at 90 degrees for as long as possible so that the hip twist is still taking place during the contact period between jo and tachi.

Anyway, a new blog entry is waiting for my fingertips….