Technically speaking I was teaching on this seminar so the notion that I might learn something through experience deserves me to be strung up and pelted with potato peelings. Anyhow, it was an enjoyable weekend and I did learn some stuff, from watching what people were doing, talking to them about it and also sharing some of Martin Clark's thoughts and experiences. He is a very good teacher when allowed to spread his wings at these events as he otherwise keeps a low profile when other high grades are around (to his credit).

We started the first day trying to improve our balance during nukitsuke and kirioroshi by swapping our legs out during the furikaburi. I found this very useful as it forced one to slow down the furikaburi in order to fit the leg movement in...and this is where things go wrong.

Furikaburi is quite a tricky action in Seitei. It is described in the following sequence:

With a feeling of thrusting behind one's left ear, lift the kissaki up in a parrying action ensuring that the kissaki does not drop below horizontal.

Sounds easy doesn't it? And yet there are a few more conditions which have to be considered and are taught orally:

These all tend to make this movement more complex that it seems. I have tried to show this on the diagrams below: 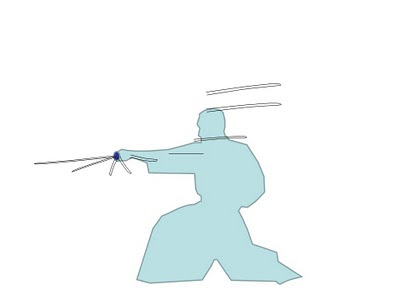 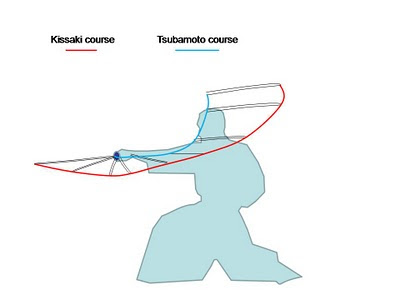 What is a bit more obvious to see from the diagrams is that:
a) The right hand remains quite static in it's position throughout a lot of angular movement of the sword.
b) This movement should be done keeping the edge of the sword pointed at the opponent.
c) The upward inclination of the sword is gradual and once it is started, the sword does not disincline again (i.e. the upward angle of the sword is maintained).

Many people (myself included when I am not concentrating do a number of the following things:

a) Bring the sword across the body and let the edge drop.
b) Bring the kissaki and tsubamoto straight up onto the centreline in too steep an angle.

It's a bit difficult to write about these things but very easy to see them. I urged the people at the seminar to slow down and make sure this movement was correct especially checking that the sword was thrusting past the left ear.

The image shown of Ishido Sensei is actually him doing furikaburi (check out the left hand). You can see how flat the sword is while the right hand is hardly moving.

The rest of the day was spent going through seitei. One bit of advice which I gave the others which I intend to use more for myself was to stop using all forms of power. This only has the effect of making the kata "lumpy" but by trying not to use power then it created something of a "tabula rasa" or I like to think of it as a clean workbench to work from. From there one can start to add contrasts of feeling, timing, speed and power but one first has to ensure that one's technique is pretty much correct first. With training this should be easy to achieve once one stops trying to throttle their sword.

I'm just trying to remember the points that me or Martin made, here are some of them:

I sat on the grading panel in the afternoon to examine the ikkyus, shodans and nidans. Luckily Tony Devine was sitting next to me and I could seek advice from him. I consider myself to be an utter novice in gradings despite writing the Examiner Mentoring Programme. It is very difficult to maintain concentration and not miss obvious mistakes. After a while though I believe that one develops a bit of a gut instinct for seeing the good parts of people's performance. I saw that a lot especially from the more senior-in-age candidates. Where they were unable to do things fast or sharp I could sometimes see calmness and maturity.

Anyway, a great weekend (for all I hope) and a good chance for me to draw seitei points to my own attention for training (tonight).