Well I'm covering a couple of sessions now and still keeping on a koryu theme. I am finding lots of things interesting to work on the more time I spend delving into the various koryu kata but I have been keeping myself busy with Shoden and Chuden recently.

I focused on Ryuto recently, trying to do it by a factor of 10 against other forms as I realise it really is a form that requires some kata mileage in order to be good at it. Like most other forms it's performance is related to leg power as the entire speed is dependant on getting up quickly. The bits I am trying to focus on in particular are:

I have tried to emulate Ishido Sensei's timing of "tatum-tum" but it is very difficult. It might be better for me to do the form less sharply and more gracefully given my size but I still want to be able to do it quickly. I think I have written this all before in a previous post.

I want to jump forwards to Iwanami now. I train in guilt that I always tend to skip this kata a little bit, not doing it more than once or twice compared to the grating I have been giving the other Chuden katas. I'm not sure why I had this reluctance but it's probably to do with the difficulty I have in controlling my weight distribution and being able to slide back cleanly and rapidly. Still, I decided last week to give this one a bit more attention and set to work on it. The first thing I was steered to do (in fact this bit of advice came a long way back) was to try to get the body moving back without the whole body coming up first. After that it is a case of nice timing as there is a propensity to do this form quickly but without much in the way of meaning. It's difficult to write about the mental block I have around doing the sweeping cut but it's probably hesitance about doing something quite strenuous like this cut while both feet spend a bit of time off the floor. Perhaps I don't understand that bit properly...

Jumping back now to Yokogumo. I like this kata and I think it probably has a longer history than Shohatto and would thus be a primal seed of all the seated kata. Chuden, being shorter in distance and timing than Shoden, tends to move quite quickly and I have been aware that Yokogumo may well lend itself to speed training in iaido. To this end, and on the basis that generally my iaido is a bit sluggish due to my size, I have decided to make this form "one of my own". By this I mean, I am putting a little bit of me into the version of this that I want to do. In my opinion (only), the rapidity of the form is created thus:

These last two points are the ones I was working on last night in particular. The diagram below sort of shows what I mean in terms of the tension and position after nukitsuke: 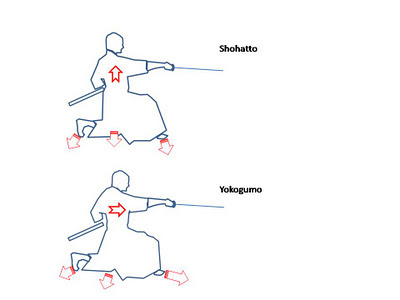 In contrast to this, I feel, the feeling in the body is slightly more forwards. This is more so in the lower body where the rear foot is quite strongly pushing back, the body weight positioned so that the rear knee inclines some force down and back and the front foot being pushed strongly forwards.

At this point in Yokogumo, to create a fast furikaburi-kirioshi action, the tension is released in the lower limbs and hips and the body quickly moves forwards and under the sword as it is raised and quickly brought down. I spend quite a few goes just practicing this intermediate sequence and it can become very fast after a while.

I think this is something I am going to go onto practice a bit more in the next few weeks as it has the propensity to become either something quite nice or at least be good for my development of lower body strength.