Okay I should point out now that this wasn't a marathon, I just set myself the target last Wednesday of doing each shoden form once, chuden twice and seated okuden three times. Not actually that many kata considering what some people put themselves through but I was trying to work on quality rather than quantity.

So WTF does that mean exactly?

Well, my expectations of myself are that I shouldn't have to do shoden forms lots of times before I feel satisfied in any session that I have done one well. That may sound a bit arrogant, I don't mean it to be and I don't claim to have mastered shoden or anything high sounding like that. What I mean is that I try to challenge myself to do shoden forms to the best of my ability with one strike only and not gradually working myself up to pulling a rabbit out of the hat. It's actually quite a nice kind of training, one slows down, one focusses and one's rhythm feels a bit more meaningful....almost like doing an embu but with no one actually watching.

I don't claim to have the same experience in chuden or okuden which is why I give myself 2 and 3 times each kata respectively but I do still have the expectation that the kata should feel fairly stable by the time I get to the final go at each form.

My more recent focus in terms of curriculum has been hayanuki and seated okuden. For those of you who are newish to this iaido malarky, hayanuki is an exercise of going through all the chuden forms continuously. The sequence tends to be specific to different teachers although our dojo (and I think Ishido Sensei as well although I have heard him recite a different order once) is 1, 2, 3, 6, 5, 4, 7, 8, 9, 10 and as one comes back into iai hiza at the end of one form so this should transition into the beginning of the next.

Many people go through this almost as a kind of athletic exercise and I also do this sometimes if I think I have been physically lazy in any session....but to be honest I don't find it very satisfying to do this kind of throcking other than the satisfaction of making you puffed out. What I much prefer is to do hayanuki with a perceptable ebb and flow so that each form is done just to the same ability as doing them individually but with a kind of critical connection between each one. Practitioners of Gohon no Midare might understand what I am trying to get at here. What I think I mean (although I'm not sure I am explaining it well) is that the quietness of the connection between each form should amplify the action within the form just as the Kan- (of Kankyukyojaku fame) elements of the kata (such as furikaburi and iaigoshi) contrast the -kyu- elements (such as kirioroshi).

I have also become something of a fan of doing hayanuki one handed (err...that is the right hand) as it does force one to become even more sensitive to the course and position of the sword. My sensei commented on Wednesday that my noto was much better when I did hayanuki one handed than with two and I guess the reason for this might be that the left hand has an even more positive grip of the saya than it normally would.

Anyway, that's my chuden practice at the moment, on to seated okuden.

I used to kind of push seated okuden to the back row of my mind, to me they consisted of:

Plus they were in tatehiza.....again! Just when you though chuden was going to knacker your knees and feet up, here comes okuden! Some of you will shrug and say

but I'm sure more than 50% of people would say

"ugh, I hate it when my toe knuckles are bleeding at seminars"

"what is that funny lump growing on the top of my foot?"

These are all valid statements and questions (i.e. I have also suffered them) but I guess I now want to find what is there in okuden which is worth training for. I think I am starting to find that special thing but I first want to share something which has been going through my mind in the last few months which is.......do the inner and primary principles of MSR/MJER iai echo through the various teachings? That is, are there parallels in raw technique between the forms in one set to the other? I don't think it is something that I will be able to answer anytime soon and my money would be on Richard Stonell finding the answer first. But let me demonstrate what I mean by the following simple diagram: 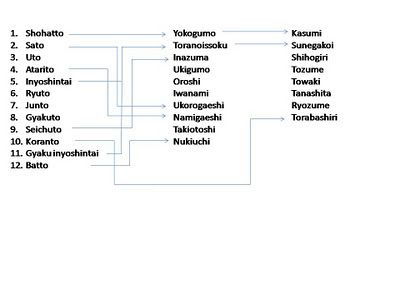 You can probably see what I mean. Let's put standing okuden to one side for a moment but you can see that the first kata of each set is a basic maegiri (front cut) as I would think would be the same for nearly all koryu iai. Rotation followed by a nukitsuke and kirioroshi is common to both shoden and chuden and a block to a cut to the lower leg is common at all three levels. I mentioned this at the Koryu Seminar in Poland recently and tried to show where the commonalities lie. I'm not sure why I am interested in this, it just seems elegant, as a scientist would say. I think it's elegant because it shows possible evidence of a gradual evoluation of the kata. Furthermore (and I know that some people are mad about this but I don't know why) it shows how some kata work as counterattacks for other katas or at least how some katas are counterattacks to the counterattacks to earlier katas (yes, you read that right).

Kasumi, as an easy example, shows clearly what to do if the enemy dodges the nukitsuke in Yokogumo (or Shohatto for that matter). What happens if the enemy does a devastatingly strong cut in Toranoissoku? Then get lower and use the higher point on the sword to block as in Sunegakoi.....it goes on.

Anyway, that's just a diversion but it helps me to keep interested in okuden when my toes are screaming in pain not to be bent back any further.

"It's in the interest of academic study!" I scream back to them.

"Come down here and say that!" they scream back.

I have already developed a keen liking of Tozume, enough for me to pick it as one of my koryu forms for my 6th dan grading and from that anchor point I have worked on the others.

Kasumi I really like and for years haven't been able to do it with any sharpness, due largely to the length of my sword and lack of training of course. Something must have clicked recently and the double cut has become quite sharp. I like the way that this form can be upgraded to reflect one's proficiency which I will explain here:

Since the Gothenburg seminar this year where Ishido Sensei taught our group the seated okuden, the other kata have become more interesting and more challenging as the final objectives were revealed. I won't go into them now but will save them for another blog soon and will continue my exploration of the other forms shortly.

In the meantime I wish everyone a very enjoyable Xmas and look forward to seeing and training with you in 2012 (the Chinese year of the chicken kebab!)