There's nothing like getting everyone else to partake in your practice for ensuring that you do some training yourself so given that I had the run of the dojo this evening with a bunch of mostly low grades (thank you London Transport) I decided to get everyone to go through the first few forms of Shoden.

I explained where the style came from and what the teaching purpose of Shoden was i.e. to develop basics, to understand distance, to get the body to move. After explaining and showing Shohatto we all went off and gave it a try. I first asked Cezary to film me doing Shohatto so I could see how I was doing. He filmed me from various angles so I could get a good perspective of the overall performance and he also pointed out that my noto was quite agressive and tending to turn my hips.

During the course of the evening we progressed through to Inyo Shintai. During one of the earlier forms I was asked about whether to stop at the end of nukitsuke and I responded by explaining the difference between tome and tame. The former means to stop and has a nuance or resting - something to be avoided in a kata. The latter means to accumulate or as Yuki added, to charge oneself up (which I thought was a brilliant translation) and is what should be happening at those moments of stillness in a kata where it seems that something is going on but it is difficult to perceive what it is. During this explanation I tried to demonstrate two variations of timing between nukitsuke and furikaburi - one by "stopping" (and by this I mean not resting but "tameru'ing") and one just carrying on moving. This was interesting for me as while I had seen my sensei doing it once or twice I had never done it myself. I did it and surprised myself how easy it was to carry on through from the nukitsuke into a seme action and then into kaburi and kirioroshi. I will have to ask at the right time if I should attempt to do this at the grading, I have certainly seen a few high graded Japanese do it at an embu (not that that should allow me license to do it myself I understand).

The lesson pretty much carried on like this until Sensei arrived and we wrapped up for the evening. On getting home I reviewed the videos and am still quite surprised as many of the problems I thought I might still have are gone and I have improved in areas that I wasn't paying much attention to. 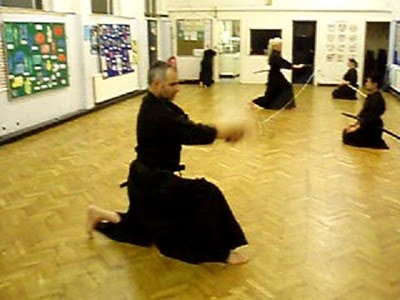 Things that immediately grab my attention are:
Things I need to be careful of though:
Apart from that I am slightly filled with a bit of confidence although I have to go through the videos with a fine tooth comb (AKA VLC media player and slow-mo). The one video which did surprise me was the one taken from the front. Usually I hate my iai from this perspective as everything looks unbalanced and without much effect but this doesn't show up so much this time.

Anyway I am posting one or two of the videos on this blog for posterity, please excuse the funky wall decorations (and the appearance that I have a mohican...).