Some Traditional Ways To Do Kesagiri Incorrectly

So I am now approaching the one-year boundary to taking my 7th dan grading in Iaido and achieving Level 10 Paladin status (with a +8 vorpal blade to boot). Naturally this means I now have to focus on the important things in life to prepare:
So in this theme of avoiding doing any training at all costs, I thought I would spend some time in the dojo filming my students and commenting about how they are "still doing it wrong, you never listen, why am I even here if you don't listen, I told you this last week etc, etc, etc" so I ensure that they feel that they are properly valued.
I decided to turn my focus on Kesagiri, a form that somehow gets little attention compared to other Seiteigata so by my reckoning probably means that we (I mean me) are missing out some essential bits.
Let's start at the beginning with the translation of the ZNKR instruction on the most important part in this path to spiritual perfection - hacking your opponent in two...

I'm going to stop there because I don't want to get into how to make hasso kamae etc.

In the chakuganten (critical points for examination and judging) the significant one of the two is asking whether the rotation of the sword is made above the shoulder or not.

So these are the bits which are "decided"; we also receive various bits of advice and instruction from our Japanese patron teachers over many years including:

I think these are generally inarguable as they have been instructed by a very wide range of teachers, both from official delegations to private invitations.

So, the fun began by seeing how each cut related to each other when I started torturing (aka filming) certain students. I present here a small sample of those movies and I am grateful to those who allowed me to make these images. Not to be outdone by Yuki Shima's Jodo blog (with animated images) I thought I would waste some time doing the same.


I should add here, before Oli falls on his sword, this was the worst case out of three movies that I took but I would say pretty typical of what most people do.

I have combined a sequence with no enemy and with an enemy in the following clip...

Again you can see that the course described by the kissaki on the uppercut shows an opponent that is so close on the downward cut that they would likely be hit the hands or the tsubamoto rather than the monouchi.

You might now also start to see some extra lines showing one of the probable causes.

Let's look at Will next. Firstly just the cutting lines...

You will notice that Will's uppercut has a bit more of an outreach than the other examples. Let's see it with Mr K.Teki in the image...

So, while it isn't perfectly aligned for both cuts, this is slightly better; Will's downward cut is using the centre of the blade. I should also point out another couple of interesting observations:

So, now onto Perfection itself i.e. me.

I should point out that I asked myself to be filmed after:
So basically I cheated. Anyway, here I am in glorious normal speed...


You can then see the kissaki course lines and my front foot positioning...

You will notice that the intersect point is quite low now with this version. I then superimposed Mr K.Teki and also emphasised the entry points of the sword by turning my shinken into a nice yellow light sabre...

Not perfect by any means (the camera perspective here doesn't help much either) but the point I am trying to make is that to enhance one's Kesagiri one should try to ensure that the entry part of the upper cut and the downward cut both use a reasonable portion of the monouchi and not the kissaki going up and the tsuba coming down. The position of this intersect point is crucial to doing this right. The higher the intersect point is then the less chance that a correct paired cut is made. 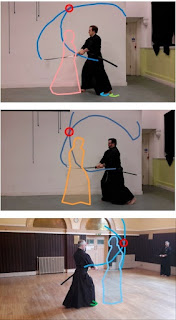 So I think from some of the observations from these clips, the causes of a distance mismatch can be boiled down to:

This latter point I actually noted back in a previous posting... 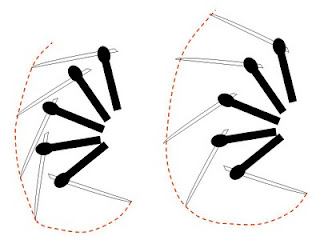 The course on the left is fairly typical with the right arm dragging the sword up instead of using the tenouchi to drive the kissaki forwards. This shouldn't mean drawing the sword downwards so that the kissaki hits the floor. Ishido Sensei has demonstrated time and time again how leaning forwards doesn't help at all.

To continue this analysis, I have had to call upon the help of a friend of mine. Ladies and gentlemen, for his first time on Shugyo - Iaido and Jodo Training Blog - please let me introduce Arthur... 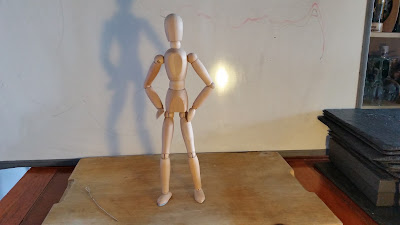 Arthur has quite a nice dojo. Wooden floors, mats stacked up in the corner, even a bar to go for a bit of a warm down snuck around the back. He's also a bit of an idiot. His feet come unstuck during camera shoots and he won't allow to put screws through his feet. Still he can be of some help...

Now look at the intersect point. It's almost in front of his face. If we put Mr K.Teki in position (he's wearing a very fetching green today) we can see how the two cuts relate to each other...

Points to note though:

With regards to 4. I don't believe that it's necessary that the feet should remain absolutely static in order for one to make friends and influence people. However, the more residual movement there is, the less alignment occurs between the two cuts. This isn't by any means in order to make the kata static and non-dynamic. There should be no problem with, for example, the rear foot shifting up slightly while the sword is traveling from the koiguchi to the first contact point. The point is that the body shouldn't be moving after this first contact.

So now, how to avoid dragging the sword up into what would be a very short distance cut during the kiriage. I tried it myself and advised others to train this nukitsuke without any intention of lifting the arm. This starts off with a very light and moderately slow cut. However, our muscle memory is so tuned to wanting to lift the sword, after even a small amount of practice, the feeling of needing to lift the arm once the kissaki had moved into a first contact position was very strong and almost automatically resulted in a kiriage. A much better result than before.

Actually all of this reminded me of a comment that Ishido Sensei made while talking about Morishima Sensei; he said that now Morishima Sensei was making his final steps in this kata much slower in order to accentuate the speed of the cut. This certainly works very nicely to control and moderate the foot movement so that there isn't this post-cut residual movement.

So in summary, a note to myself (and to you if you find yourself doing the same thing in this kata, it shouldn't be many of you, perhaps only 95% of you....):

Anyway, I have some washing to go and do during which I can think about training....hmm, maybe something wrong here....