Woot, made it to 50 sessions and my arms haven't fallen off yet. Wednesday and the couple of days following makes me realise how grateful I am to be part of a dojo filled with people who are willing to listen to my vague feedback to them about their iai, not really helping them at all, just so I can meditate on what was bothering me for the next 2-3 days. I'm sure once I am older and more dribbly that they will have their vengeance, like putting earwax into my liquidised food, but for now they happily exist as petrie dishes for my thought experiments and directionless mutterings and my development to 6th and the end of rational thought.

My teacher told me about one year ago that my Iaido training had to move it's focus away from the "What" and onto the "When". This post is devoted to that thought.

We expanded our abstract order training of seitei to 3 forms each this week (wow) and with no direction of what, where and when any emphasis should be placed. We then separated into free practice, Harry and me doing Chuden and the others doing seitei bits and pieces.

I was now caught and bothered by Lucy and Aurelien's nukitsuke from Mae. I couldn't help noticing that the sword was coming out a little too directly and easily and with little sayabanare going on. I spent a bit of time explaining how sayabiki converts into sayabanare at the moment of release of the kissaki from the saya. This in itself is a difficult thing to time. It is necessary, especially in Muso Shinden Ryu, to not finish the final sayabiki until the sword is actually cutting into the nukitsuke. This is of course quite a small movement with the saya compared to the larger movement of the sword and one can either make the saya move in slow motion (which then lacks any sharpness to the movement) or moderate the earlier part of the movement into a final acceleration. Tricky indeed. Suffice to say, the entire control of the left hand on the saya is a complex one. I have tried to simplify the action in the diagram below: 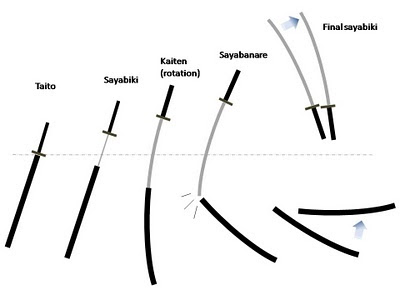 This implies (and correctly I believe) that sayabiki comes and goes a little bit or rather, it's speed is modulated during the nukitsuke action.

I guess my point around this is that just at the moment of sayabanare there needs to be a building up of feeling, a moment of tame, rather than simply pulling the sword out and casting it at the opponent. I'm not suggesting that this is a long moment but something needs to be there. This is the way I originally learnt this form, that the form demonstrated saya no uchi no kachi and hence that in the Seitei description one puts the hands on the sword gently. The draw is to be done in a way that prevents the opponent from attacking. If at any moment the opponent gives up then one can avoid attacking them. By drawing the sword out quickly then one has not appreciated the meaning of this technique and in Seitei, this kind of draw is quite unique whereas nearly all the other forms require the hands to be put on the sword sharply.

But looking deeper into this point, this is what I think: that at the moment where the decision is finally made to draw the sword, this is the point where you are most likely to die.

By this I mean that this must be the final moment, where the enemy's attempt to attack is maximised and is thus the most dangerous point for you. The Seitei manual describes this in the line "kisen o sei shite [komekami] ni nukitsuke" or "seize the moment of opportunity and draw to the opponent's temple". I think this "seizing of the moment" is an important point to express in one's kata if we are attempting to import Katsujinken (the sword that saves or wins) into what would otherwise be Setsuninto (the sword that kills). I also believe that whether one intends to allow the opponent to live or not, the moment of this decision needs perceiving, living and tempering . It is a moment where one has decided to kill. It is also the moment that you are about to die.

It reminds me of a nice proverb which reads quite well in Japanese:

Shori no shunkan
Kabuto no himo wo shime

At the moment of victory
Tighten the helmet straps

The meaning of this of course is that the very moment of victory is the moment when the opponent is at their most dangerous and you are most likely to lose. Perhaps instead of the Seitei manual saying about "seizing the moment" that the phrase "squeezing the moment" would be more appropriate.

From a practical point of training, I am pretty sure that at a high level the only way to actually see this moment would be through looking at a slow-motion video, however if the sword is merely accelerating out of the saya with no point of tame then clearly this moment does not exist. In fact I think that the setting of the front foot position is probably just the second where this moment exists.

Anyway, after watching the others go through considerable pain to analyse and change what they were doing I encouraged them to play around with the various versions of Koranto to lightent the moment somewhat. Hopefully that will make them hate me less.